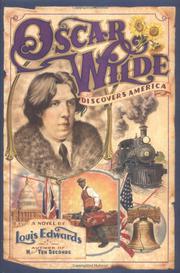 OSCAR WILDE DISCOVERS AMERICA
by Louis Edwards
"Tremendous fun: a marvelous story animated with just the right savvy, melodrama, wit, and fantasy."
A young man comes of age in the company of the great Irish wit and playwright, a story told by Edwards (N, 1997, etc.) with a sophistication worthy of its subject. Read full book review >

FICTION & LITERATURE
Released: May 19, 1997
N: A ROMANTIC MYSTERY
by Louis Edwards
FICTION & LITERATURE
Released: May 19, 1997
N: A ROMANTIC MYSTERY
by Louis Edwards
Edwards's second novel (after Ten Seconds, 1991), a tragic romance with less mystery than the title promises, plays with the conventions of genre literature in order to tell a more profound tale of race, sex, and the meaning of identity in America. Framed as a screenplay, this clever narrative alternates the levels of discourse, from the intellectually discursive to the lingo of the New Orleans streets. Negotiating this complex landscape is AimÇe DuBois, a young journalist who is part Creole drama queen and part black intellectual, but totally committed to the truth, wherever it leads. And in this intrepid little novel it takes her places she has purposely avoided most of her privileged life. Having inherited a local black newsweekly, AimÇe decides one day to get the complete story of a young black man shot dead in the ghetto, another example, presumably, of black-on-black crime. In the projects, AimÇe finds herself drawn to the dangerous allure of the street, discovering love with an unlikely drug dealer named Strip. Meanwhile, she also discovers much about Arthur King (``Poopie''), the drug dealer who's the subject of her search. Citizen Kanelike, she re-creates the boy's life. His young mother, his boxing trainer, his drug boss, his preacher, and his girlfriend all testify to his intelligence, his kindness, and his well- controlled killer instinct. But AimÇe finds her quest complicated by personal involvement: Her niece, Denise, is pregnant with Poopie's baby. As the circle of suspects widens, from jittery drug- dealers to AimÇe's upset brother (Denise's father), AimÇe asks herself some hard questions about Strip as well. The meaning of Poopie's murder is both more and less than expected—the end of an existential crisis that plagues many young black men. Yes, the title also refers to the ``n'' word, as Edwards brilliantly deconstructs the language of race in America, a country and culture he celebrates for its invigorating mix, much like this smart and genre-bending book. (Author tour) Read full book review >