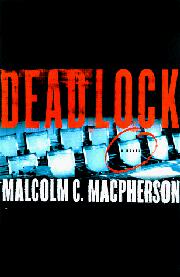 FICTION & LITERATURE
Released: Feb. 1, 1998
DEADLOCK
by Malcolm C. MacPherson
FICTION & LITERATURE
Released: Feb. 1, 1998
DEADLOCK
by Malcolm C. MacPherson
MacPherson (In Cahoots, 1994, etc.) offers a lively, if gimmicky, San Franciscobased legal procedural that leavens the requisite sleazy sensationalism with a Dickensian delight in oddball characters, class warfare, and courtroom arcana. With his black nylon robes swirling around him, neophyte Superior Court Judge Daniel Barr's only hope is that he doesn't become another Lance Ito. Facing him beyond the bench is Feng Shao-li, an illegal alien who has only contempt for American jurisprudence and who's now accused of fatally stabbing Holly Hawkesthe lovely niece of US Senator Stanton Hawkesduring a streetcorner robbery in Chinatown. Just about everybody is screaming for Feng's bloodexcept his defense attorney, ``Sweet Tommy'' Lovelace, an overly conciliatory slob, and the judge's father, State Justice Henry Barr, who seems to know more about the case than he can reveal. During an early adjournment, Judge Barr gets an anonymous note informing him that Feng is innocent and that Holly's killer is actually sitting on the racially balanced jury. Former journalist MacPherson uses this ploy to examine how easily jury selection can be rigged, and then turns his reporter's eye on the cultural and social barriers that polarize the city's upper crust, of which Hawkes and Barr are members in good standing, from the city's mostly Asian underclass. Rather than recuse himself or declare a mistrial, Judge Barr embarks on some clumsy amateur detective work that plunges him into an oddly clichÇd Chinatown, where he discovers, predictably, that Holly's killing was arranged to cover up nasty goings-on involving the Senator himself. A la Richard North Patterson's sexy San Francisco legal melodramas, MacPherson adds a romantic complication: Barr, a widower with a son, must decide if his inamorata Jenny, who also works for Senator Hawkes, is Ms. Right. A flashy opening gives way to a routine, albeit tangled, legal yarn that's redeemed by a quirky cast and a wide-eyed fascination with courtroom chicanery. Read full book review >