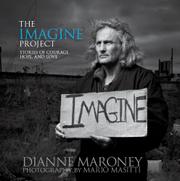 In this debut coffee-table book, Maroney brings together dozens of personal stories, each accompanied by photographs of the narrators and identified with thematic titles—gift, heritage, winning, resolve, etc. Each narrative is a series of sentences beginning with "Imagine..." followed by an element of the narrator's story: For instance, "Imagine...appreciating what you've left behind only after seeing this new and different land," says a woman who moved back and forth between Japan and the United States. Or "Imagine...standing at a stranger's door, a can of paint and paintbrush in your hands, hoping they will let you paint their house—for free," from a man who found new purpose in good deeds after his wife died. Some stories reflect the narrator's triumph over a difficult past—a teenager who grew up in the foster care system and went on to win a national financial literacy competition, a musician who performs despite being born with cerebral palsy, etc.—while others are more about the individuals' choices, such as using yoga as the basis for a microfinance operation. A few of the featured individuals have been associated with headline-making events, such as the ER staff who treated the mass-shooting victims in Aurora, Colorado, and a Columbine High School graduate who learned forgiveness. But most share victories on a smaller scale, acclimating to an adopted homeland or touching lives through low-budget philanthropy. While all the contributors' stories are uplifting, they avoid the clichés of motivational speeches, and the spare prose keeps even the most tragic stories from becoming maudlin. The book is well-designed, too—a simple blue, black and white palette allows the words and pictures to draw the reader's full attention.