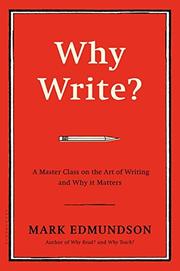 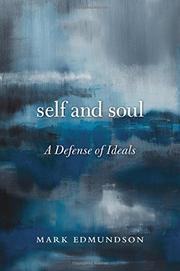 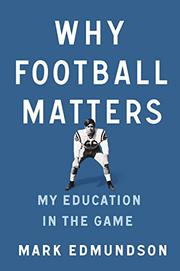 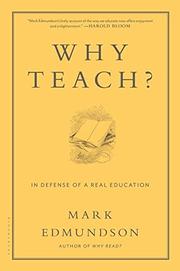 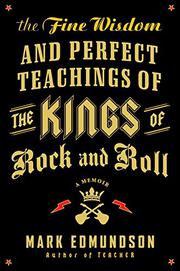 THE FINE WISDOM AND PERFECT TEACHINGS OF THE KINGS OF ROCK AND ROLL: A MEMOIR
by Mark Edmundson
BIOGRAPHY & MEMOIR
Released: May 4, 2010

THE FINE WISDOM AND PERFECT TEACHINGS OF THE KINGS OF ROCK AND ROLL: A MEMOIR
by Mark Edmundson
"A near-perfect memoir."
Edmundson (English/Univ. of Virginia; The Death of Sigmund Freud: The Legacy of His Last Days, 2007, etc.) delivers a wily, playful, self-denigrating memoir. Read full book review > 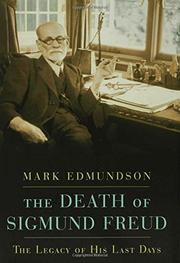 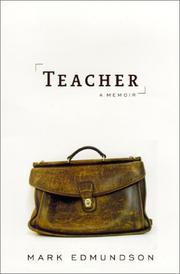 TEACHER: THE ONE WHO MADE THE DIFFERENCE
by Mark Edmundson
BIOGRAPHY & MEMOIR
Released: Aug. 13, 2002

TEACHER: THE ONE WHO MADE THE DIFFERENCE
by Mark Edmundson
"A small treasure, both Edmundson's portrait of Lears and his high-relief, visceral snapshot of Medford."
The wry and affecting story of the teacher who got under the author's skin and pointed his life in a new direction, much for the better. Read full book review > 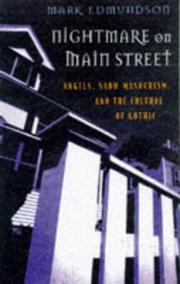 HISTORY
Released: Oct. 31, 1997
NIGHTMARE ON MAIN STREET: ANGELS, SADOMASOCHISM, AND THE CULTURE OF GOTHIC
by Mark Edmundson
HISTORY
Released: Oct. 31, 1997
NIGHTMARE ON MAIN STREET: ANGELS, SADOMASOCHISM, AND THE CULTURE OF GOTHIC
by Mark Edmundson
What do Richard Nixon, Freddy Krueger, O.J. Simpson, and Edgar Allan Poe have in common with one another—but not with Percy Bysshe Shelley and Ralph Waldo Emerson? Answer: The former express our nation's cult of gothic guilt and fear; the latter are potential models of redemption. Edmundson (English/Univ. of Virginia) argues that the gothic mindset, exemplified in lurid classics of the late 18th century (e.g., Walpole's The Castle of Otranto and Lewis's The Monk) dominates contemporary American culture. From these works he distills categories that he finds ubiquitous in modern pop culture, including protagonists equally divided between good and wicked selves, scenarios in which dungeons or other underground scenes of sadomasochistic horror figure prominently, the hidden past that refuses to die (in recovered-memory syndrome), and so forth. Racism is, above all else, the part of the American past that refuses to die, haunting us in fiction (Toni Morrison's Beloved), in the news (O.J.), and in cinema. Edmundson has written an entertaining and thoughtful book, but his overly elastic thesis occasionally gets the better of his good judgment. He is prone to write outlandish things, making his book at times a lurid bit of American gothic itself. His arguments often fall into the categories he criticizes: Poe, for example, is Emerson's evil twin in the American tradition (his America seems divided between angels and incubi). Though he justifiably scorns the recent angel craze as an expression of phony transcendence, he also presents Shelley, Emerson, Whitman, and even Nietzsche as angels of a sort (he calls them ``visionaries'') who might deliver us from our abject need. One might say that this book's thesis belongs in the American tradition of cultural pessimism, the very malady for which it purports to be the cure. Even though Edmundson's main thesis is overdrawn, his book is rewarding. It has many startling insights, shrewd observations, and considerable narrative momentum. Read full book review > 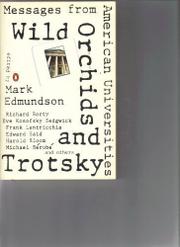 NONFICTION
Released: Feb. 9, 1993
WILD ORCHIDS AND TROTSKY: MESSAGES FROM AMERICAN UNIVERSITIES
edited by Mark Edmundson
NONFICTION
Released: Feb. 9, 1993
WILD ORCHIDS AND TROTSKY: MESSAGES FROM AMERICAN UNIVERSITIES
edited by Mark Edmundson
From Bloom to Kimball to D'Souza, attacks on the liberal arts have been one-sided, argues editor Edmundson, who here invites 12 academics to ``set the record straight.'' The resulting essays and interviews are dispiriting in a ratio of about two to one. Philosopher Richard Rorty does a semiquixotic job of arguing that the absence of philosophic absolutes doesn't necessitate the end of social coherence (``Wild Orchids and Trotsky''), while Edward Said (``Expanding Humanism'') speaks out with high clarity against intellectual repression via religious zealotry. Harold Bloom, too (``Authority and Originality''), is passionate and crystalline in distinguishing between the literary and the political, as is William Kerrigan, who argues in ``The Falls of Academe'' that deconstructionism and other recent literary ``theory'' is not only ``derivative'' but is ``a prescription for mediocrity''; while Richard Poirier shows brilliantly that pragmatic skepticism comes from Emerson in a richly ironic form that makes Paul de Man look feeble and that long predates him. For the rest, however, the case seems dim for renewed confidence in academia. In ``My Kinsman, T. S. Eliot,'' Frank Lentricchia maunders through the subject of ethnic identity, revealing that he has nothing to say—although his piece is a sonnet of tightness next to the protoplasmic amorphousness of Eve Kosofsky Sedgwick's ``Queer and Now.'' Judith Frank discusses Defoe next to prefab ``issues'' (``In the Waiting Room: Canons, Communities, `Political Correctness' ''); Nancy K. Miller skims the surface of a history of feminism; and Michael Berube, young follower of literary ``theory,'' reveals himself as soaringly jejune. Whether language or ideas are the more penurious here is often arguable, as in Houston A. Baker's case for rap music as the new poetry: ``If today's critic wishes to assume the futurity of the heterogeneous artist and be adequately predictive, then he or she must understand the rap artist as critic and stop chilling with respect to alterity.'' After a few high, clear notes, a swoop to despond. Read full book review >