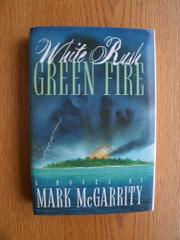 MYSTERY THRILLER
Released: Sept. 18, 1991
WHITE RUSH/GREEN FIRE
by Mark McGarrity
MYSTERY THRILLER
Released: Sept. 18, 1991
WHITE RUSH/GREEN FIRE
by Mark McGarrity
What happens to six friends cruising the Caribbean when they come across $2.4 million cash and $10 million stash from a drug deal gone bad: a gripping, though overextended, crossover novel from the chronicler, as ``Bartholomew Gill,'' of Dublin Chief Inspector McGarr (The Death of a Joyce Scholar, etc.). Five of the six finders—NYPD Deputy Chief Bill Cicciolino and his social-justice crusader wife Gerri, Columbia prof Jay Gelb and his oversexed wife Arlene, and Gerri's chronically tipsy brother Tug McCann—jump at the chance to grab the loot from the dead and dying dealers and peddle the coke in New York. But the sixth, Tug's girlfriend Eva Burden, jumps ship in revulsion and swims smack into not-quite-dead drugrunners Brian Nathanson and David Creach, whom she nurses back to health, falling in love with Nathanson, who really wants his money back. As for the other five, sounds like Sierra Madre time—but instead of letting them stew until they tear each other apart (though Bill does start playing around with Arlene, Jay sticks a fortune up his nose, etc.), McGarrity hits them with a Fan Club plot: it includes not only Nathanson but Medell°n's handpicked assassin, glamorous deaf Solange Mercier la Guatavita ( who has her own lethal quarrel, if she only knew it, with her clients) in hot pursuit, and Eva, whose previous murderous brush with Solange makes her the only person who can warn the new kids on the block before their numbers come up. Bill's convoluted scheme to dispose of the stash is entertaining, and it's fun to see him and his colleagues getting picked off one by one, but you'll finish this long, overplotted, and genuinely thrilling thriller with a combination of confusion and relief. McGarrity's unquestioned ability to tighten the screws for 500+ pages makes this an exhausting read—and maybe too much of a good thing. Read full book review >