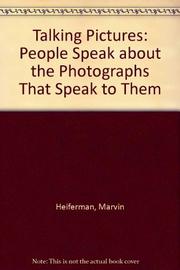 NONFICTION
Released: Oct. 3, 1994
TALKING PICTURES: PEOPLE SPEAK ABOUT THE PHOTOGRAPHS THAT SPEAK TO THEM
by Marvin Heiferman, Carole Kismaric
NONFICTION
Released: Oct. 3, 1994
TALKING PICTURES: PEOPLE SPEAK ABOUT THE PHOTOGRAPHS THAT SPEAK TO THEM
by Marvin Heiferman, Carole Kismaric
An ambitious, glossy, consumer-friendly package that has a wide range of people commenting on photographs that have affected their lives. Heiferman and Kismaric run Lookout Books, a producer of popular photography titles (notably, William Wegman's children's series). Here, they interview some 69 individuals—celebrities, artists, laypeople—after having asked each to choose an image he or she finds powerful. Works of photojournalism, from the old Life magazine in particular, awoke feelings in many. G. Gordon Liddy tells of having a gut reaction at age 11 to a stark WW II image of dead Marines washed up on a New Guinea beach. Benjamin Spock speaks of being shocked to pacifist activism by Nick Ut's 1972 shot of children fleeing a napalm strike in Vietnam. From the other side of the camera, lensman Eddie Adams walks readers through a graphic account of how he happened upon his Vietnam-era picture of the execution of a Vietcong lieutenant. Elsewhere, art photographers such as Bruce Weber, Duane Michals, and Mary Ellen Mark weigh in, personalizing aspects of their craft. Celebrities contribute also, and strive not to sound vapid. These include: Ginger Rogers, Joan Rivers, Tony Bennett, Dennis Hopper, and Naomi Campbell. More lively are the views of everyday folks. Rock fan Gina Greco nimbly explains the ``wild monster'' appeal she finds in a portrait of Guns N' Roses lead singer Axl Rose. For some, family snapshots are the most emotionally loaded, as with convict Aida Rivera, whose HIV-positive sister Yvette poses proudly with her children, presaging her death. Other inclusions run the gamut—high-tech scientific studies, snapshots, advertising imagery, film stills, pornography. The book will accompany a traveling exhibition, which opens at New York's International Center of Photography this fall. Its contents are also being issued on CD-ROM. A slick and calculated crowd-pleaser of a project that ably pits fine art against popular culture. Read full book review >