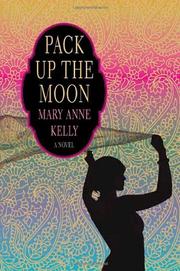 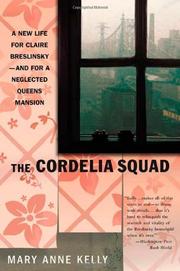 MYSTERY THRILLER
Released: June 1, 2003
THE CORDELIA SQUAD
by Mary Anne Kelly
MYSTERY THRILLER
Released: June 1, 2003
THE CORDELIA SQUAD
by Mary Anne Kelly
"Lots of family bickering around the extended dinner table, adolescent temper tantrums, and divorced-wives' angst—but not much mystery."
Much gooey romance and a spark or two of arson befall newly divorced Claire Breslinsky (Keeper of the Mill, 1995, etc.) when she moves herself and her two teenagers, Anthony and Tree, into a mansion much in need of renovation in Richmond Hill, Queens, within shouting distance of her take-charge mom, her retired pop, and her sisters Zinnie, a cop, and Carmela, a sarcastic part-time beauty writer. Claire and her chatty clan have barely begun turning the house into a B&B when flowers arrive mysteriously, her Indian neighbor Lakshmi explains how to get access to one of the house's many secret passageways, and an arsonist has a go at Claire, necessitating her rescue by hunky fireman Enoch O'Rourke. There's another fire, an orphaned brute of a dog that Claire adopts, and several paying customers for the B&B, including two elderly nudists and handsome Signore della Luna, who is trying to buy up all the local mansions, raze them, and make his fortune in condo development. Zinnie falls in love. Ditto Carmela. Even young Anthony. But Enoch will have to rescue Claire one more time before his proposal is accepted. Squeezed in between the schmaltzy interludes are one arsonist's suicide and the other's apprehension by the feds. Read full book review > 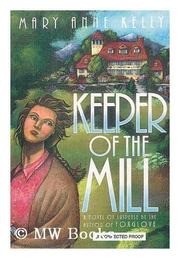 Released: Dec. 1, 1995
KEEPER OF THE MILL
by Mary Anne Kelly
Released: Dec. 1, 1995
KEEPER OF THE MILL
by Mary Anne Kelly
Fortyish photographer Claire Breslinsky (Foxglove, 1992, etc.) lives in Queens with hard-drinking, underemployed husband Johnnie and two children. Her elderly friend and neighbor is Iris von Lillienfeld, a long-ago refugee from Nazi Germany. Claire had lived in Munich for ten years when she was actively pursuing her career and is delighted to be invited to be matron of honor at the wedding, near Munich, of her German friend Isolde and Claire's onetime lover, Dr. Blacky von Osterwald. The two are to be married at Saint Hildegard's Mill, an inn with bittersweet memories for Iris, who escaped the Nazis with help from then owner Adam von Grunwald. He became her lover, and hid for her a cache of diamonds- -for which she never returned. Adam has long since died, and the Mill is now run by his son Hans, a widower with grown children, with help from ancient cook Evangelika and frosty manager Fraulein Wintner. Also resident are filmmaker Temple Fortune and his effeminate English aide Puffin Hedges. In short order Claire is swept up by an overwhelming attraction to Fortune, and Hans dies in a fall that may not be accidental. The wedding takes place, followed by a second questionable death that brings about the revelation of secrets hidden for decades, the unmasking of a killer, and, for Claire, a mission fulfilled. Here, mystery and suspense, heavily contrived and crammed into the closing chapters, take a backseat to Claire's obsession with Fortune and the interplay among her moneyed, narcissistic friends. Claire, though poor, comes off as self-absorbed as any of them. A jumbled story with pretentious overtones. Read full book review > 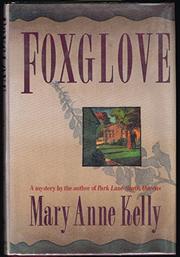 MYSTERY THRILLER
Released: Dec. 16, 1992
FOXGLOVE
by Mary Anne Kelly
MYSTERY THRILLER
Released: Dec. 16, 1992
FOXGLOVE
by Mary Anne Kelly
Photographer Claire Breslinsky, visiting her prospective house in Richmond Hill, Queens, is delighted to find that one of her new neighbors is her old friend Theresa (``Tree'') Medicino. But before Claire and her family can move in, Tree is dead, apparently of a stroke—though Claire's convinced she's been killed by her husband Andrew Dover, who's callously installed a satellite dish on their house, taken up with Portia McTavish, and parked his neglected daughter Dharma with Claire. Taking time out from an endless round of cute family crises—her sister Carmela, whose husband is still in love with Claire, has written a play to star her sister Zinnie; Claire's old guru Swamiji arrives with a disciple en route to Berkeley; motherly child-killer Mrs. Dixon (Park Lane South, Queens, 1990) has escaped from the asylum—Claire manages to stumble on the not-very- interesting solution. As before: much boisterous domestic intrigue, laced with lethal doses of tedious Irish charm and just enough mystery to leave you thoroughly exasperated. Read full book review >