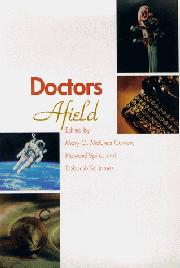 BIOGRAPHY & MEMOIR
Released: Oct. 1, 1999
DOCTORS AFIELD
by Mary G. McCrea Curnen, Howard Spiro
BIOGRAPHY & MEMOIR
Released: Oct. 1, 1999
DOCTORS AFIELD
by Mary G. McCrea Curnen, Howard Spiro
A quirky, intriguing collection of portraits of an extraordinary group of physicians—21 men, 6 women—whose leisure time is spent immersed in creative pursuits. To Curnen and Spiro (both professors at Yale's School of Medicine) the range of their subjects' extracurricular interests attests to "the continued presence of creative energy in their lives. . . . A sense of adventure and exploration leads doctors afield into realms that complement or supplant their calling in medicine, and we are richer for these strayings.— Each subject, after a brief introduction by the editors, tells his or her own story, and they are, on the whole, remarkable. From painting (Sir Roy Caine and others), music ("F. Norman Vickers: Jazzdoc"), and writing ("Rafael Campo: A Prescription for Poetry"), we head all the way to astronautics, learning how William Thornton found himself doing physical exams on board the space shuttle Challenger. Although psychiatrist George W. Naumburg Jr. graduated from the Yale School of Medicine, "Yale also contributed to his career in wine making by providing him a background in chemistry and biology." Back in the roaring 20s, Naumburg recalls, "we tried unsuccessfully to make beer, and our Concord grapes proved worthless for anything but jelly"—but he now owns his own Westchester County, New York, winery. Others have followed a calling to "The Spiritual Life" (including a prison priest), to government, and to collecting (old maps, medals). The editors keep themselves in the background, letting these physicians' often passionate voices be heard, as when Andrew W. Nichols chronicles years of public-health work in the Third World and among the US poor, followed by his triumphant election to the Arizona House of Representatives: "No longer the supplicant before policy makers, I could influence those policies so consequential to the lives of my constituents.— A diverting glimpse into some unusually creative minds. (40 b&w and 8 color illus.) Read full book review >