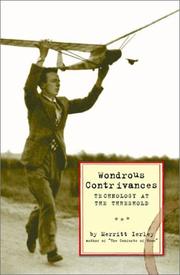 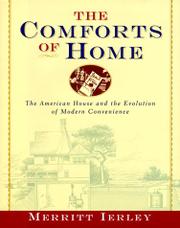 NON-FICTION
Released: Nov. 17, 1999
THE COMFORTS OF HOME: THE AMERICAN HOUSE AND THE EVOLUTION OF MODERN CONVENIENCE
by Merritt Ierley
NON-FICTION
Released: Nov. 17, 1999
THE COMFORTS OF HOME: THE AMERICAN HOUSE AND THE EVOLUTION OF MODERN CONVENIENCE
by Merritt Ierley
A brief and remarkably dull history of the creature comforts, from indoor flush toilets to microwave ovens, that are taken for granted in homes today. Author Ierley (Open House, 1999) has made himself something of an expert on the American home, and in this volume has tried to highlight the pioneer inventors and entrepreneurs whose 19th-century ingenuity has made the livin' so easy. Each of his three chronological sections, spanning from 1805 to the present, incorporates descriptions of developments in Power, Fuel and Water Supply, Heating, Lighting, the Bathroom, and the Kitchen. To follow the evolution of modern toilet facilities, read the sections on the water closet and the bathroom as if they were one unit (as perhaps they should have been), and you—ll find that the principle of the flush toilet was demonstrated as early as the 16th century. The problem then and for centuries to come was delivery systems: Water had to be hand-pumped or carried to a cistern attached to the "stoole pot," and the contents flushed into a closed container which also had to be emptied by hand. As water began to be piped into more and more homes beginning in the mid—19th century, the primitive design evolved into its efficient modern counterpart. Ierley discloses similar scenarios for bathing, cooking, and heating, describing a primitive central heating system, for instance, installed in a private American home as early as 1820. By the 1860s, the British were already complaining about overheated American buildings. Refrigeration, washing machines, even dishwashers and air conditioners all had early prototypes ("the 19th century was a marvelously inventive time in America"), apparently lying in wait for a cheap and convenient source of energy to evolve into today's appliances. Dozens of early diagrams and charts, many incomprehensible, illustrate the new inventions and their impact. Fragmented and muddled, with considerable solid research gone to waste. (125 illus.) Read full book review >

NONFICTION
Released: March 1, 1999
OPEN HOUSE: A GUIDED TOUR OF THE AMERICAN HOME, 1637-PRESENT
by Merritt Ierley
NONFICTION
Released: March 1, 1999
OPEN HOUSE: A GUIDED TOUR OF THE AMERICAN HOME, 1637-PRESENT
by Merritt Ierley
A guided tour of the floor plan of American civilization, noting the evolution of the American home—from structure to function, from heating to plumbing, and from colonial times to today. Despite social historian Ierley's (Traveling the National Road, not reviewed, etc.) technical expertise, one does not need a degree in drywall to appreciate his down-home view of American culture. Here, for example, is the author's functional prose on one of the most characteristic symbols of our traditional cultural openness: "Veneration of Mount Vernon, and its great piazza, was clearly an important element in the popularization of the front porch." He gives us a chronology of entire homes, beginning with "arguably the oldest living relative of the American house," the Fairbanks House of Dedham, Mass. (1637). Even though the house was built shortly after the Pilgrims arrived, this two-story, four-room home is described as nearly "modern," despite its lack of indoor plumbing and electricity. With the large room near the hearth for cooking, and the spinning wheel for working (few people seemed to have commuted to work in the 17th century), the origin of the "living" room becomes clear. Guests were brought to a "best room," which evolved into a dining room and parlor; we are also made privy to the location of the outhouse. According to Ierley, basements were once the closest things to refrigerators, although two vises and a turning lathe attest to the antiquity of the cellar workshop. More than 200 photos and line drawings illustrate the many architectural styles and features that the layperson has seen but often cannot identify. A time line, source notes, and bibliography prove just how solid a foundation Ierley has dug for this book. For anyone excited by the wood, brick, stone, and mortar of how Americans have expressed themselves in their choice of shelter, this multistory book is zoned for pleasure. (First serial to American Heritage) Read full book review >