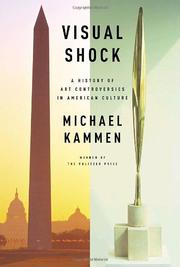 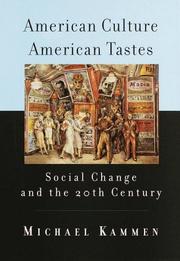 HISTORY
Released: Aug. 24, 1999
AMERICAN CULTURE, AMERICAN TASTES: SOCIAL CHANGE AND THE 20TH CENTURY
by Michael Kammen
HISTORY
Released: Aug. 24, 1999
AMERICAN CULTURE, AMERICAN TASTES: SOCIAL CHANGE AND THE 20TH CENTURY
by Michael Kammen
Pulitzer-winning historian Kammen (Cornell; In the Past Lane, 1997; People of Paradox, 1972; etc.) offers a thoughtful essay on the evolution of leisure in America from the late 19th century to today. In their pursuit of leisure, Kammen estimates, Americans now spend over $1 trillion a year—"far more than they spend on health care, on cars and trucks, or on housing." Kammen proceeds to trace how Americans have spent their leisure time and money, and how critics and other authorities have perceived American culture since the emergence of popular culture in the late 19th century. Distinguishing popular culture (participatory or interactive activities on smaller scales, such as nightclubs or amusement parks) from mass culture (passive activities on a large or societal scale, such as television), Kammen divides America's modern cultural history into three phases: the heyday of popular culture from 1885 to 1935; the period of the emergence of "proto-mass" culture from 1935 to 1965; and the growth of mass culture from the mid—-60s through the present. Within these time frames, Kammen explores such themes as the growing democratization of culture as Americans found themselves with unprecedented time and opportunity for leisure, and the decline of ideals of "high culture"; the growth and transformation of popular culture by advertising and other techniques of mass consumerism; the blurring of taste levels during the heyday of commercialized popular culture between what was formerly known as "highbrow" and "middlebrow" culture, and the decline of the authority of critics and the rise of such authorities as opinion polls, television ratings, and the corporate sponsor. The consequence of these phenomena, Kammen writes, is "an increase in cultural populism," a decline in cultural elitism, and the growing cultural importance of powerful economic forces. A stimulating inquiry into the conflicting ways in which Americans have understood their dynamic and influential culture, more valuable for the paradigms and issues it raises than for the answers it provides. Read full book review > 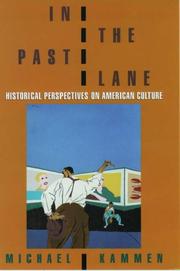 HISTORY
Released: Sept. 1, 1997
IN THE PAST LANE: HISTORICAL PERSPECTIVES ON AMERICAN CULTURE
by Michael Kammen
HISTORY
Released: Sept. 1, 1997
IN THE PAST LANE: HISTORICAL PERSPECTIVES ON AMERICAN CULTURE
by Michael Kammen
In a scattershot group of insightful essays, Pulitzer Prizewinner Kammen (History/Cornell; The Lively Arts, 1996, etc.) offers varied perspectives not so much on American history as on its uses and effects. Kammen's outlooks range from the personal to the broadly cultural. In a long essay, he challenges the notion of historical objectivity, demonstrating the manner in which personal issues often drive historians in choice and treatment of subject matter. He also sympathetically examines the approaches of academic and nonacademic historians to their craft, exploring problems ranging from relationships with students to coping with professional criticism. Kammen divides his remaining essays into two thematic groups: those exploring perceptions of culture and public life, and those examining changing perceptions of the past. In the first, he discusses such diverse issues as the history of government support for cultural programs, the development of courthouse architecture and its meaning for our evolving views of justice and the legal profession, and the exploitation of historical and cultural images in advertising. In the second, Kammen emphasizes our self-conscious reshaping of the past in historical art (often laden with cultural values) the problem of American exceptionalism, and the ``practice'' of historical amnesia by political leaders in order to create cohesive national myths. Finally, Kammen explores the workings of our notion of ``heritage''—``those aspects of history we cherish and affirm''—in the operation of selective historical memory. While a sense of heritage can lead to false history, the author calls heritage in its best sense ``an enticement . . . that could conceivably bring us to history as enchantment, as mental exercise, and as a source of self-knowledge that points toward enlightenment if not wisdom.'' A perceptive look at the practice of history, by one of its leading practitioners. Read full book review > 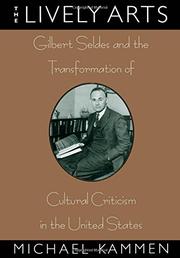 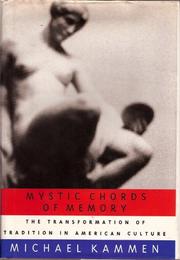 HISTORY
Released: Nov. 13, 1991
MYSTIC CHORDS OF MEMORY: THE TRANSFORMATION OF TRADITION IN AMERICAN CULTURE
by Michael Kammen
HISTORY
Released: Nov. 13, 1991
MYSTIC CHORDS OF MEMORY: THE TRANSFORMATION OF TRADITION IN AMERICAN CULTURE
by Michael Kammen
An ambitious, wonderfully detailed investigation into the shifting perceptions of American cultural identity from Pulitzer Prize-winner (People of Paradox, 1973) Kammen (American History and Culture/Cornell; A Machine That Would Go of Itself, 1986, etc.). Taking his title from Lincoln's First Inaugural Address plea for national unity, Kammen asserts that, particularly in times of upheaval, ``a usable past has been needed to give shape and substance to national identity.'' Thus, the broad chronological division of the book into three postwar periods: 1870-1915, when the trauma of civil war and an influx of immigrants made history a mechanism for social and political unification; 1915-45, during which time the tensions of memory and modernism, populism and elitism, combined to forge a uniquely American aesthetic; and 1945- 90, an era of ``amnesia'' encompassing an intense interest in things historical and a shocking lack of specific knowledge. Throughout, the author masterfully untangles the threads of myth, tradition, and nostalgia underlying the curious ``ambiguities and dualisms'' of a nation stubbornly devoted to both past and future vision. Hence, there arose such very American anomalies as Henry Ford following up his transformation of working life and leisure (and his oft-quoted remark that ``History is more or less bunk'') with obsessive collecting and the creation of two ``living'' museums. Splendidly inclusive in the best, most delightful vein of intellectual history, in which no cultural artifact is discounted as trivial, Kammen's study offers a liberal sampling of high and low culture—literature and popular reading material; pageants and parades; art, architectural, and design trends; museums, theme parks and monuments—as well as a nice dollop of historiography and a careful consideration of similar movements abroad. Admirable, perceptive, and refreshingly well balanced—a daunting task superbly accomplished. (One hundred and forty-five illustrations—not seen.) Read full book review > 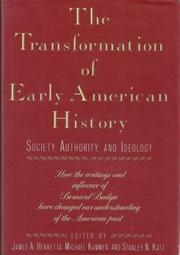