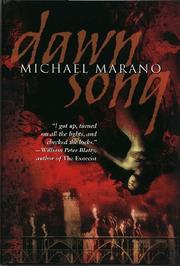 SCIENCE FICTION & FANTASY
Released: June 1, 1998
DAWN SONG
by Michael Marano
SCIENCE FICTION & FANTASY
Released: June 1, 1998
DAWN SONG
by Michael Marano
Densely original, poetic, imaginative, dark-fantasy debut that treats Belial and His minions with jarring insight. A Succubus appears in Boston during the 1990 Christmas season. The soul-sucking Succubus is at first a kind of white glob that needs food—lovers—to give herself body and carry out her Father's wishes, and also to discover her Name. Purple-prose poems throughout take hell seriously, keep us abreast of Belial's obscene rages, and offer particularly vivid, flesh-crawly descriptions of Hell that Dante never thought of. Boston itself is a gray swamp of despair and futility, in which a variety of hapless characters slog through troubled and uncertain lives. The Succubus learns about life by infiltrating an apartment building, seeping through its walls, turning into both a cat and a mouse, and feeling itself rent, shredded, and gutted by the cat, all as a way of refining its sucking skills. The human characters are not an attractive bunch, and many are slated for the Big Slurp as the often gorgeous Succubus enters them erotically, literally jellies their brains with her fingers, then absorbs their souls into herself. Among the figures the Succubus studies are Lawrence, a melancholy young bookstore clerk with a habit of picking up the wrong men in gay bars; Paul, who is half-dead from depression; and Miriam and her infant son, who live with Elizabeth, Miriam's cranky lesbian lover. All of these and many more half-blind characters are pawns in a large battle between the Abyss and the throne room of God. And the Succubus, risen to Materiality, will have, before the dawning of Christmas Day, a rich feast survived by few. Pain and perpetual twilight pulse through a tale that leaves a taste of sulfur on the tongue. Read at your own risk. Read full book review >