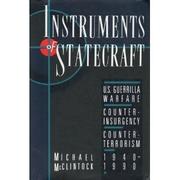 HISTORY
Released: Jan. 1, 1992
INSTRUMENTS OF STATECRAFT: U.S. GUERRILLA WARFARE, COUNTERINSURGENCY, AND COUNTERTERRORISM, 1940-1990
by Michael McClintock
HISTORY
Released: Jan. 1, 1992
INSTRUMENTS OF STATECRAFT: U.S. GUERRILLA WARFARE, COUNTERINSURGENCY, AND COUNTERTERRORISM, 1940-1990
by Michael McClintock
The locale may have changed—Greece, the Philippines, Vietnam, Africa, Central America—but the strategy was the same: a proxy action by the US government fought on the cheap and on the sly against the Soviet Union. This cautionary history by McClintock (The American Connection, 1985—not reviewed) makes extensive use of declassified and previously unpublished documents, but never breathes life into this sordid tale. McClintock finds that unconventional warfare resulted largely from anticommunist fervor and studies of the new type of war waged by both Axis and Allied powers in WW II. With Third World brushfire conflicts breaking out in the postwar period, US policymakers saw guerrilla warfare as a means of striking back against the USSR by ``fighting fire with fire,'' yet without resorting to open intervention. American units, including the OSS, the CIA, the Green Berets, and the Delta Force, taught surrogates such techniques as assassination (the infamous contra manual), sabotage, kidnapping, coups, and torture. This isn't news, of course, having been covered in analyses of CIA excesses against Castro, counterinsurgency doctrine in Vietnam, and the Iran-contra scandal, but McClintock supplies a context and many new details, particularly on how special-warfare doctrine has been employed even in the post-cold war era, in fighting the Gulf War and Latin American druglords. And while McClintock's questions—is unconventional warfare consistent with American ideas of humanitarianism and liberty, and is it even effective in the long run?—are important, they lose their force amid his turgid prose and lumbering narrative. A controversial, often dismaying chapter in American history, examined with depth but not grace. Read full book review >