Michael Novak, a former U.S. ambassador, is the author of The Universal Hunger for Liberty, the best-selling The Spirit of Democratic Capitalism, and many other books. He holds the George Frederick Jewett Chair in Religion, Philosophy and Public Policy at 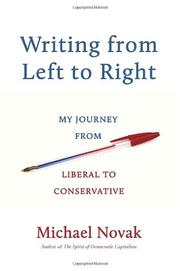 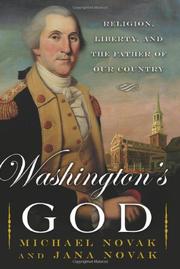 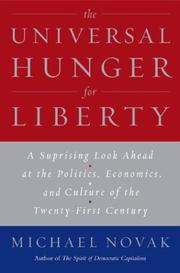 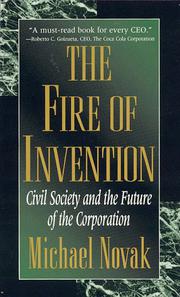 HISTORY
Released: Oct. 1, 1997
THE FIRE OF INVENTION: CIVIL SOCIETY AND THE FUTURE OF THE CORPORATION
by Michael Novak
HISTORY
Released: Oct. 1, 1997
THE FIRE OF INVENTION: CIVIL SOCIETY AND THE FUTURE OF THE CORPORATION
by Michael Novak
Glimpses of a fruitful discussion can be found here, despite the effort to hide them behind erudite claptrap. Unfortunately, Novak (Business as a Calling, 1996, etc.) appears to have fallen prey to the post-communist conservative's infatuation with manufacturing enemies. Explaining the business corporation and its role in modern society would be an important contribution. But, given the realities of wealth, power, and popular values in this country, unleashing Novak on corporate critics, as occurs here, is a waste of intellectual energy, like using nuclear weapons to fend off kids with pea-shooters. In the initial section of this slim volume, war is declared against those who would destroy ``public enemy number one, the business corporation.'' An enlightening but somewhat misplaced discussion of patent and copyright laws follows. The issue of corporate governance is taken up in the final section, however, and here a distinction between the nature and purpose of corporate associations and those of governmental associations is genuinely useful. Novak argues that the benefits of corporations flow from pursuing specific goals through dynamic organizations, whereas the benefits of government flow from pursuing general goals through relatively static organizations. Imposing the norms appropriate for the latter will only prevent the former from providing all that society needs from them. Novak calls for a ``philosophy of business'' to clarify the purpose of corporations, but rather than proceeding to develop it he reverts to attacking leftists, who are characterized as expecting ``employees to receive diamond rings on the day they are hired.'' Closing with a claim that the ``one main purpose'' of the corporation is ``to create new wealth for the whole society'' rather than for stockholders, he confuses his argument by expanding expectations of corporations in precisely the manner he finds objectionable. This is not the serious work we have come to expect from Novak. (Author tour) Read full book review > 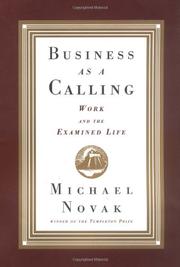 NON-FICTION
Released: June 11, 1996
BUSINESS AS A CALLING: WORK AND THE EXAMINED LIFE
by Michael Novak
NON-FICTION
Released: June 11, 1996
BUSINESS AS A CALLING: WORK AND THE EXAMINED LIFE
by Michael Novak
A spirited defense of commerce as a worthy career and of democratic capitalism as the best socioeconomic system among known alternatives. Like John M. Hood (The Heroic Enterprise, page 504), Novak (The Catholic Ethic and the Spirit of Capitalism, 1992, etc.) finds much to admire. Indeed, he argues that business has a vested interest in goodness if only because it cannot advance in the absence of such cardinal virtues as cooperation, courage, honesty, industry, innovation, practicality, and realism. The author goes on to document the many ways in which for-profit concerns benefit host communities and the wider world simply by measuring up to their basic obligations—creating new jobs, earning appropriate returns on investments, producing wealth, promoting respect for the rule of law, satisfying customers, et al. He also notes ways in which trade unions might play more constructive roles in an era of corporate downsizing, e.g., by organizing labor collectives to offer pools of skilled contract workers to employers. Novak (a sometime seminarian who makes no secret of his Roman Catholic faith) is at pains to couch his message in ecumenical rather than ecclesiastic terms. To this end, he dwells on studies indicating that, among America's elites, businesspeople trail only the clergy and military officers in the degree of their religiosity. While the author cites the achievements of a wealth of entrepreneurs and executives, moreover, he singles out Andrew Carnegie for extended attention as a sort of secular saint. In particular, Novak is fascinated by the ÇmigrÇ industrialist's resolve to give away all his riches before he died. The author devotes the best part of his concluding chapter to this largesse and what he believes are the lessons to be learned from it. Vocational counseling of an unusual order, as tough-minded as it is good-hearted. (Author tour) Read full book review > 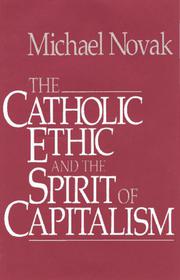 NON-FICTION
Released: Feb. 22, 1993
THE CATHOLIC ETHIC AND THE SPIRIT OF CAPITALISM
by Michael Novak
NON-FICTION
Released: Feb. 22, 1993
THE CATHOLIC ETHIC AND THE SPIRIT OF CAPITALISM
by Michael Novak
Close on the heels of Richard John Neuhaus's Doing Well and Doing Good (p. 970) and George Weigel's The Final Revolution (p. 1247): yet another neoconservative study of Catholic teachings on economic freedom and social justice. Like Neuhaus, Novak (Freedom with Justice, 1984, etc.) concentrates on Pope John Paul II's seminal 1991 encyclical, Centessimus Annus. For Novak, the Pope's message is clear: political and economic liberty go hand-in-hand. Thus, capitalism has it over socialism—but this is a new form of capitalism, guided by religious imperatives to help the poor. Although Novak seconds Neuhaus on this analysis, many other observers don't, believing the Pope to be forwarding a third economic system, perhaps akin to Chesterton's distributism, as an moral alternative to both capitalism and socialism. In any case, for Novak, the ``Catholic ethic'' is sharply distinct from the famous ``Protestant ethic'' of Max Weber, in which making money is life's chief goal. The main difference, says Novak, is that Catholicism sees creativity rather than gross materialism as the soul of capitalism. He traces the evolution of this view through a hundred years of papal writings, culminating in John Paul's view of human beings as ``persons'' in the image of God, endowed with absolute rights to freedom and justice. From this airy perch, Novak descends into the nitty-gritty, offering suggestions for implementing the new capitalism. In Latin America, the poor must be given their share of power. In the US, he calls for welfare reform (letting welfare recipients gather nest eggs); parental responsibility; a campaign to shame the media, which promotes moral decay; universal home ownership; and, above all, an awareness that America's greatness lies in Jeffersonian values rather than in moral relativism. An attractive moral/economic vision, intelligently argued—but will it fly? Read full book review > 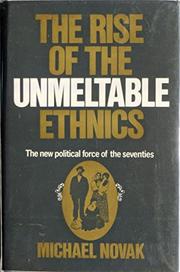 NONFICTION
Released: April 20, 1972
THE RISE OF THE UNMELTABLE ETHNICS
by Michael Novak
NONFICTION
Released: April 20, 1972
THE RISE OF THE UNMELTABLE ETHNICS
by Michael Novak
A somewhat disordered and impressionistic but sensitive exploration of the values, grievances, and prejudices of "the ethnics" which combines a plea for the politics of cultural pluralism (cities of 100,000 including "real Chinatowns," "little Italys" and "three or four Warsaws") with an imaginative assault on the presumptions of WASP "superculture." Drawing on autobiography (he's a Catholic of Slovak extraction) and literature as well as recent studies of blue-collar discontent, Novak lashes out at Left-liberal university-based professional elites who have embraced black militancy while abandoning the PIGS (Poles, Italians, Greeks, Slavs) to the ministrations of nativist reactionaries from Wallace to Nixon. Although he fails to distinguish between specific ethnic resentments and more pervasive — and above all, economic — working-class malaise, his insistence on the priority of "moral, communal issues of identity and value" complements such recent studies as the Sextons' Blue-Collars and Hard Hats (1971) and Howe's The White Majority (1970). Novak is at his best when Sealing with the subtleties of Anglo-Saxon xenophobia peering down its blue-blooded nose at the "coarseness" of swarthy immigrants while branding ethnicity a regressive, dysfunctional vestige in the American mainstream. "Concerning work, guilt, reason, sex, family, violence, the irrational, tragedy, the future, hope, piety, sacrifice, pain, ethnics do not all think or feel as WASPs think or feel," says Novak, pointing to (and sometimes romanticizing) the harshness of the immigrant experience and their general exclusion from affluence. The occasional slapdash generalization (e.g., "in general the Catholic soul finds it difficult to value success") must be taken with salt but overall this is a well-argued and perceptive history of the American experience — unWASPed. Read full book review >