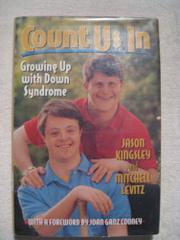 NON-FICTION
Released: Jan. 12, 1994
COUNT US IN: GROWING UP WITH DOWN SYNDROME
by Jason Kingsley, Mitchell Levitz
NON-FICTION
Released: Jan. 12, 1994
COUNT US IN: GROWING UP WITH DOWN SYNDROME
by Jason Kingsley, Mitchell Levitz
Two young men with Down syndrome celebrate—with the support and word-processing assistance of their mothers—their successful coming of age and hard-won independence. When, three years apart in the early 1970's, Kingsley and Levitz were born and diagnosed with Down syndrome, their respective parents were advised to institutionalize the boys without even taking them home from the hospital. Fortunately, that advice was ignored, and the parents became friends through the Parent Assistance Program on Down Syndrome, founded by the Levitzes; soon, the boys became friends as well. As pioneers in the infant- stimulation program now widely approved, if not widely available, for Down syndrome children, Levitz and Kingsley entered some early special-education programs and went on to be mainstreamed in high school. Bolstered by the unusually rich cultural resources of their families, they passed their New York State Regents exams, graduated, and are now dipping their toes into college and independent living. The text here consists primarily of transcribed conversations (minus difficulties in articulation) between Kingsley and Levitz, along with their parents' occasional interjections and questions, supplemented by some written material from the young men. It's both a celebration of the pair's triumph over expectations (``we should call each other Up syndrome'') and a sometimes painful recitation of their struggles and sorrows. All the usual issues of adolescence are here—sex, girls, God, death, love, war, independence—discussed with both a realistic assessment and an idealistic innocence that typifies ``mainstream'' teenagers. Levitz, who loves politics, wants to be President; Kingsley, with the soul of a performer, wants to be a teacher, newscaster, actor, and spokesperson for the disabled. Each grudgingly accepts that they may never get driver's licenses—but, as Kingsley says, life is ``A Learning Adventure.'' Worthwhile inspiration and insight for Down syndrome children, as well as for their families, teachers, friends, and advocates. (Photographs) Read full book review >