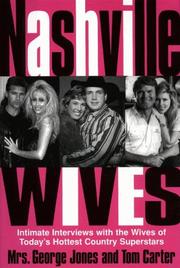 BIOGRAPHY & MEMOIR
Released: Nov. 1, 1998
NASHVILLE WIVES
by Nancy Jones, Tom Carter
BIOGRAPHY & MEMOIR
Released: Nov. 1, 1998
NASHVILLE WIVES
by Nancy Jones, Tom Carter
Fairy-tale vignettes of love and sacrifice, sprawling homes in the Nashville suburbs, and the hardships of raising children on the road riddle the interviews of Mrs. George Jones with Nashville's most talked-about spouses. Tempered by Jones's dramatic spin and her polite nosiness, these true tales of southern celebrity claim a certain entertaining starkness—the same (very popular) starkness as country music. Ghostwriter and collaborator Carter's invisible imprint may have helped to send each wife's account on a biographical turn; the chapters take a long-term look at these women's former lives before they became the luckiest women below the Mason-Dixon line. Revealed covertly beneath their stories of marriage, home, family, and fame is the society of Nashville, particularly the clash between music-industry executive thinking and the traditional southern roles of husbands and wives. Jones repeatedly describes how industry pressures often bring pain to the domestic arena. However, these women's stories are packaged to save the faces of Nashville heroines before the story inside the story is really delivered. In the chapter about Mrs. Billy Ray (Tish) Cyrus, for example, Tish is introduced alone in her bedroom in Kentucky, crying—with her hand outstretched to the television screen. On the screen, far away in Nashville, her husband croons with 'sexuality and mystery,— as if —unattached,— and only at the insistence of his management—which is looking, of course, for the next Elvis, and hopes he may be It. Ultimately, Billy Ray breaks with old management, makes millions, and everyone stops fighting. To top it off, Tish had given up a potential career in modeling to fit Billy Ray's on-again/off-again tour schedule—and to act as the proudest president ever of the Billy Ray Cyrus fan club. The wives and the author—a wife herself—work hard to bring the Nashville myth to life. Sometimes, despite all the non-secrets unveiled here, the myth even seems genuine. (32 pages b&w photos, not seen) Read full book review >