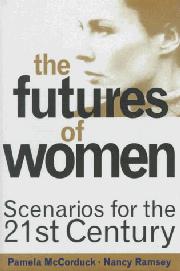 NON-FICTION
Released: June 1, 1996
THE FUTURES OF WOMEN: SCENARIOS FOR THE 21ST CENTURY
by Pamela McCorduck, Nancy Ramsey
NON-FICTION
Released: June 1, 1996
THE FUTURES OF WOMEN: SCENARIOS FOR THE 21ST CENTURY
by Pamela McCorduck, Nancy Ramsey
McCorduck and Ramsey inform, amuse, and at times disturb with these scenarios of women's possible future condition. Worried that feminist views of the future have been too ``upbeat'' or parochial, the authors map out four scenarios for women's lives across the globe over the next 20 years, ranging from virtual slavery to liberation, and from stagnation to separatism. (McCorduck and Ramsey are members of Global Business Network, a California-based organization that uses scenario planning to help identify strategies for the future). Their first scenario is a Handmaid's Talelike world in which women's sexuality is strictly controlled and exploited, their attire is restrictive, and business is ``a man's world.'' In contrast, Scenario 2 involves gender equality, the rise of goddess worship, the demasculinization of science, and the ascendancy of women in business and government. Hallmarks of the third scenario are token gains for women but overall lack of improvement. The last possibility involves women building alternative institutions, such as schools and clinics. The authors admit that the real future will probably not look like any of these, but they argue that scenarios are ``a way to plan positive change.'' And in many respects the book is helpful- -particularly in highlighting trends, including aging populations across the globe and conflicts between individual rights and group power. However, there are problems, such as the disorienting use of projections based on actual statistics in conjunction with ``testimonials'' from fictional women. Whatever the scenario, the author's biases repeatedly creep in, so that information technology is celebrated, and women (unlike men) are viewed as essentially cooperative, environmentalist, and nonlinear in their thinking. Finally, their 20-year time span seems rather short for the radical changes they describe. Nonetheless, the book reminds us of the many factors to consider when assessing gender relations, and it highlights how precious the gains of late 20th century feminism really are when taken in a global and historical context. Read full book review >