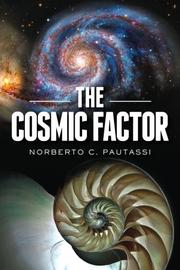 FICTION & LITERATURE
Released: June 4, 2014
Reviewed: July 24, 2014
THE COSMIC FACTOR
by Norberto C. Pautassi
FICTION & LITERATURE
Released: June 4, 2014
THE COSMIC FACTOR
by Norberto C. Pautassi
In his ambitious debut novel, Pautassi uses science, faith and romance as vehicles to explore the deeper mysteries of the universe.
Ruben Miller isn't your average college student. He's at the top of his class, and his IQ is "sky high," but he's been behaving strangely; Ruben's been staring at the river all day, every day, fixated on the salmon running upstream. At night, he dreams of professors appearing within geometric shapes and monks telling him that he can be one with the cosmos. When he meets Monique Laramie, they have an instant, uncanny connection, one whose purpose becomes clearer as the story unfolds. Monique introduces Ruben to a book called Parapsychology by a certain Dr. Martin; together, they start to realize that they are both experiencing extrasensory perceptions. In Portland, Ruben seeks out Dr. Martin, who he learns is teaching a class of psychics—people who, along with Ruben and Monique, realize their potential to explore the universe. Author Pautassi clearly has an expansive mind. In this intriguing book, the writing is often elegant, and the ideas explored are both unique and profound. Yet the drama could have been more fully thought-out. Often, the narrative pleasures take a back seat to intellectual discursions as the considerations of philosophy and theology, rich though they may be, overshadow the story. Not that the narrative is devoid of conflict; rather, the problems characters must face are too often easily resolved. Ruben's psychic abilities, for example, could have spurred conflict, but they seem to solve every problem rather than create new ones. When potentially interesting conflicts do arise, they are quickly dismissed: "For a second Ruben wasn't at all happy that Bob had read his mind. Then he quickly got over it." Much of the action, especially in the first half, takes place in symbolic dreamscapes, which, while providing plenty of opportunity for intelligent discourse, are so nonsensical that they cause the narrative momentum to stall. The exploration of the paranormal is fascinating and original. One just wishes that more human problems—the paradoxes of desire, the difficulties of communication—had been given equal weight.
A smart novel—maybe too smart for its own good. Read full book review >