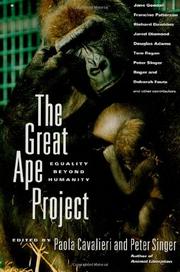 NON-FICTION
Released: Jan. 1, 1994
THE GREAT APE PROJECT: EQUALITY BEYOND HUMANITY
edited by Paola Cavalieri, Peter Singer
NON-FICTION
Released: Jan. 1, 1994
THE GREAT APE PROJECT: EQUALITY BEYOND HUMANITY
edited by Paola Cavalieri, Peter Singer
Look an orangutan straight in the eye and what do you see? A none-too-distant cousin, say animal-rightists Cavalieri and Singer (Making Babies, 1985, etc.)—a creature worthy of all the legal rights and privileges that humans enjoy. In an effort to extend aspects of equality—the right to life, the protection of individual liberties, the prohibition of torture- -to the nonhuman great apes (chimpanzees, orangutans, gorillas), Cavalieri and Singer have collected original essays from a host of high-profile contributors, including Jane Goodall, Richard Dawkins, and Douglas Adams. All agree that there's sufficient kinship between humans and the other great apes to warrant a cross-species umbrella protecting basic rights. The arguments come at the reader from three angles: legalistic, biological/physiological, and ethical, with the last being by far the most persuasive (missing, though, is any piece dealing with the religious implications of the project). While important as buttressing material, the knowledge that chimps overlap more than 98 percent of their genes with us—or that, under common law, corporations are regarded as humans—just doesn't have the same impact as the knowledge that chimps experience joy, melancholy, and fear; that they can communicate to the point of having small conversations; or that they're jokesters with subtle senses of humor. Arguments that can really change attitudes include Richard Dawkins's piece on arch-ancestry and ring species (those transitional creatures between species); Tom Regan's peek into the ugly world of lab-testing; and Jane Goodall's cutting to the heart with portraits of chimps she's had the pleasure to know. Meanwhile, lurking behind the whole project is a major can of worms: What about the rights of other species and near cousins in the animal world? Where is the line drawn, and why is it drawn? There's enough forceful material here to make this a standard- bearer in what may soon become a major ethical debate. Read full book review >