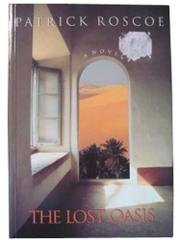 FICTION & LITERATURE
Released: Sept. 19, 1995
THE LOST OASIS
by Patrick Roscoe
FICTION & LITERATURE
Released: Sept. 19, 1995
THE LOST OASIS
by Patrick Roscoe
For Canadian writer Roscoe (Love is Starving for Itself, 1994, not reviewed, etc.), a search for a lost father in the Moroccan desert becomes a drawn-out trek into a globe-trotting family's past more colorful than credible. When Richard, now living in Seville with his lover JosÇ, gets a call from his mother telling him that his father, Mitch, has disappeared somewhere in Morocco, he is not surprised. Mitch may be simply ``bringing to conclusion upon the Western Sahara, a gradual disappearing act set in motion more than half a century ago.'' His last postcard to Richard with its suggestive message, ``Greetings from the end of the world,'' also hinted at the destination he's sought since the mid-'60s when Ardis, Richard's mother, was hospitalized for schizophrenia, and Mitch, a history teacher, left his job and, with young MJ, Lily, and Richard, began traveling. Richard recalls, as he prepares to leave for Morocco, that they searched the world but never found Mitch's fabled ``lost oasis.'' The memories continue when Richard arrives in Morocco and headswith many halts, hesitations, and hallucinationsfor the remote desert village where his father's passport has been found. He recalls their years in Europe; in Tanzania, where Mitch taught school; in Manila, Bangkok, and Mexico City, where Mitch pursued deals and the children learned that ``leeway is another word for leaving a hotel with the bill unpaid.'' In 1974, the family headed home when Mitch's ``constant role-playing'' became a strain, but the children never adjusted: MJ eventually ran away, Lily was hospitalized, and Richard, once out of school, wandered aimlessly around the world. Although his search is technically a failure, Richard leaves with a new understanding of his father and of himself. Local color to the max, often lyrically described, but the story never becomes more than a neat idea about yet another troubled oddball family self-destructing. Read full book review >