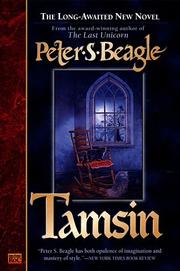 MYSTERY THRILLER
Released: Oct. 1, 1999
TAMSIN
by Peter Beagle
MYSTERY THRILLER
Released: Oct. 1, 1999
TAMSIN
by Peter Beagle
Contemporary ghost yarn from the author of Giant Bones (1997), etc. Thirteen-year-old Jenny Gluckstein leaves New York with her mother, Sally, to live with her new family, English stepfather Evan and stepbrothers Tony and Julian, in bucolic Dorset, England. Agricultural biologist Evan will invigorate a rundown farm and fix up its huge, dilapidated old manor house. Meanwhile, Jenny seethes with resentment at the unwelcome relocation—until she discovers that the house is haunted by a mischievous boggart. Next, her beloved Mister Cat finds his way up to the closed-off third floor, returning with a ghost cat that only Jenny can see! She talks things over with the boggart, then banishes him with a gift of reading spectacles. Up on the third floor, Jenny meets the ghost of Tamsin Willoughby, who died aged 20 more than 300 years ago. In Tamsin's company, Jenny meets other supernatural creatures: the shapeshifting, untrustworthy Pooka, the ominous Black Dog, the billy-blind with his badly timed good advice—and the terrifying Wild Hunt screaming across the sky. Slowly, talking with local historians, drawing out Tamsin's recollections, Jenny pieces together a tragic story that hinges on the 17th-century Monmouth rebellion and its aftermath, the bloody reprisals exacted by Judge Jeffries. But what dreadful secret binds the ghosts of Tamsin and her innocent sweetheart together with the Judge's horrid, monomaniacal shade—and the terrible Wild Hunt itself? An appealing intermingling of history, folklore, and the supernatural, but no real chills or tension—and lively young Jenny simply overwhelms everybody else. Read full book review >