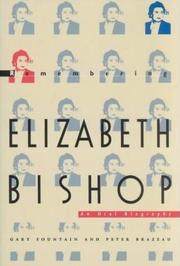 HISTORY
Released: Oct. 1, 1994
REMEMBERING ELIZABETH BISHOP: AN ORAL BIOGRAPHY
by Gary Fountain, Peter Brazeau
HISTORY
Released: Oct. 1, 1994
REMEMBERING ELIZABETH BISHOP: AN ORAL BIOGRAPHY
by Gary Fountain, Peter Brazeau
A multivocal treatment well suited to the complex and dappled life of one of America's premier modern poets. Members of Bishop's wide circle of friends from literature and the arts (among them John Ashbery, Robert Giroux, Helen Muchnic, Anne Stevenson, Ned Rorem, and James Laughlin) recall with eloquence the poet's intelligence, her reserve, her anxiety, and her peculiar intensity through the stages and stories of her accomplished and troubled life. Born to a mentally ill mother and a father who died when she was eight months old, Bishop (19111979) spent her early years living with family members in Worcester, Boston, and Great Village, Mass. Recollections by her childhood friends reveal a very intelligent but odd personality—shy, and often embarrassed or pained by common experiences. Several contributors comment, however, on the order, discipline, and companionship she found at the Walnut Hill School between 1927 and '30; there she began to write plays, short stories, book reviews, and poetry for the school's magazine. From her Vassar days, Bishop is remembered for her strong mind, arch wit, sometimes taciturn demeanor, and her talent for writing. With Mary McCarthy and others, she launched the alternative literary magazine Con Spirito, which created a sensation on campus and brought her to the notice of the Ivy League literati of the time, eventually yielding an introduction to poet Marianne Moore. After graduating from college, Bishop traveled to New York, Europe, Key West, and Rio de Janeiro, and through several lesbian love relationships, the most sustained of which with Lota de Macedo Soares. Friends recall these adult years as difficult, sometimes drunken, but also rewarding for Bishop as a person and a poet. After her lover's death in 1967, Bishop's life took shape around a series of teaching appointments at the University of Washington, Harvard, and finally New York University. Although a few of Fountain's (English dept. chairman at Miss Porter's School) and Brazeau's (Parts of a World: Wallace Stevens Remembered, 1983) transitions push too hard, the portrait of the poet this oral biography creates is, finally, absorbing and at times beautiful and graced with artfulness. Read full book review >