Peter David is a prolific author whose career, and continued popularity, spans nearly two decades. The New York Times bestselling author of more than forty novels lives with his wife, Kathleen, and his children Shana, Gwen, Ariel, and Caroline. 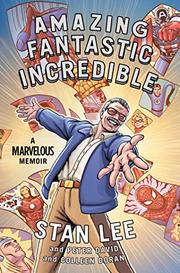 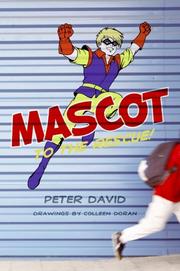 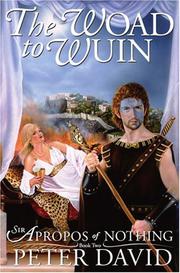 SCIENCE FICTION & FANTASY
Released: Aug. 2, 2002
THE WOAD TO WUIN: VOL. II, SIR APROPOS OF NOTHING
by Peter David
SCIENCE FICTION & FANTASY
Released: Aug. 2, 2002
THE WOAD TO WUIN: VOL. II, SIR APROPOS OF NOTHING
by Peter David
"Cyclopean drama by a one-eyed giant, his prose so golden it smudges your fingers."
Unaccountably, Davis fails to name this darkly serious sequel to his equally glum Sophoclean epic Sir Apropos of Nothing (2000), The Woad to Wack and Wuin. Perhaps his work on the novelization of that stark tragedy Spider-Man (2002, not reviewed here) left him addled with grief. But after 50 novels, many in the Star-Trek: The Next Generation series, after gargling up grunts for The Incredible Hulk, and wringing his brain for scripts for Babylon 5 and still other TV series, what can be left of man or writer? Well, enough to spell out the woad to Wuin. Who is the stingingly brilliant Sir Apropos, son of a tavern wench raped by a group of knights? Something of a cynic, for whom the world is one of endless betrayal and deprivation. Because his mother saw a phoenix burn to ash in a wood and rise again in flame, Sir Apropos is born with flaming red hair, teeth, a lame right leg, and a hodgepodge of facial features. He now carries about his murdered mother, reborn as Mordant, a phoenix too hideous to be looked upon by his beloved, beautiful weather-weaving sorceress Sharee. Apropos's present antiheroic but Schopenhaurean journey, into a world where will and idea arise knotted in twists and tangles, turns on an enchanted gem known as Eye of the Beholder, which he finds under a deformed dwarf hung from a tree in the forest. The gem is on a ring bearing an inscription, as Nibelungen rings since Das Rheingold (and borrowed by Tolkien) must: "One thing to rule them all." The ring, working its way through a hole in his pocket, lodges at the base of his upright member, and won't come off, not even after an amazing night of arduous ardors with insatiable Sharee. Read full book review > 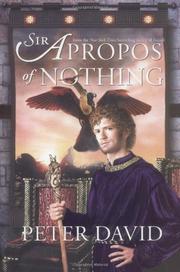 SCIENCE FICTION & FANTASY
Released: July 10, 2001
SIR APROPOS OF NOTHING
by Peter David
SCIENCE FICTION & FANTASY
Released: July 10, 2001
SIR APROPOS OF NOTHING
by Peter David
"Steady fun, yes, but rather YA."
Many know Davis from his bestselling Star Trek novels. Released from that format, he becomes a darkly amusing fantasist. The opening here echoes the oversexed court-jester scene in Everything You Always Wanted to Know About Sex (But Were Afraid to Ask), with stableboy Apropos being found in Lady Granitz's chamber by her husband, Sir Granitz, King Runcible's most bloodthirsty knight, who accidentally impales himself on his own sword while trying to slay Apropos. Apropos and Lady Granitz invent a tale that they were trying to keep Granitz from suicide. So Runcible, perhaps seeing Apropos as a marvelous patsy who may actually succeed, has the Queen send him out on a mission. Then we learn of Apropos' penniless mother who, lost once in the woods, saw a phoenix burn to ash and rise again in flame. When she's raped by six knights, the child born to her has flaming red hair, a phoenix flame on his thigh, a misshapen right leg, and teeth. Covered with birth blood, he bites a boorish tavernkeeper and is named Apropos because he's a child of violence born with teeth. His mother raises him on a whore's earnings, and he's taught to steal by Tacit, a magical youth raised by unicorns, with whom he saves beautiful Sharee the weaver from a mob. When Apropos' mother is murdered and robbed, he goes to Runcible for justice. Instead, he's made squire to creaky old Sir Umbrage, who must accompany Apropos on a mission to pick up the fiery young Princess Entipy from the Faith Women's Retreat and on the way back educate her. Or they could go to the Screaming Gorge of Eternal Madness and—would they rather make that quest? What can it mean when Apropos at last finds a phoenix birthmark just like his on Entipy's bare hip? And what do the unicorns know that he doesn't? Has he, in fact, gotten his own sister pregnant? Read full book review > 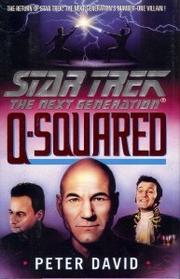 FICTION & LITERATURE
Released: July 1, 1994
STAR TREK: THE NEXT GENERATION: Q-SQUARED
by Peter David
FICTION & LITERATURE
Released: July 1, 1994
STAR TREK: THE NEXT GENERATION: Q-SQUARED
by Peter David
The latest Star Trek: The Next Generation novel from Peter David once again attempts to bring in a character from the original TV series. This time, Trelane, the pesky omnipotent child who plagued Captain Kirk in ``The Squire of Gothos,'' is back as a pesky omnipotent adolescent who temporarily neutralizes the all- powerful Q, who regularly delights in bedeviling the Enterprise crew of The Next Generation. Trelane then sets about making mischief for Captain Picard. He blurs the boundaries between three parallel universes (or ``tracks,'' as they are called here), and the ensuing chaos pits Enterprise personnel against their counterparts in other tracks, causing turmoil for the crew as they pop from universe to universe. Now it's up to the unlikely team of Picard and Q to straighten out the mess and bring the raging Trelane under control. The material is recycled and the prose stolid, but the confusing story is the biggest crime. Only diehard Trekkies will survive the derailment when the tracks merge. Read full book review >