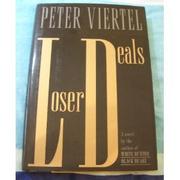 FICTION & LITERATURE
Released: Feb. 16, 1995
LOSER DEALS
by Peter Viertel
FICTION & LITERATURE
Released: Feb. 16, 1995
LOSER DEALS
by Peter Viertel
Known for his screenplay for The African Queen and his lifelong friendships with Ernest Hemingway and John Huston (about whom he wrote in Dangerous Friends, 1992), Viertel pens a clunky yet charming tale of an old American actor living in southern Spain. Narrator Robert Masters, 60ish, has spent most of the last 40 years in Europe after his career as a Hollywood supporting actor was terminated by a studio heavy who caught him in bed with the heavy's mistress. After two failed marriages and a moderately successful stint in European productions, Masters has retired to the Costa del Sol. As the novel begins, he is experiencing rough times: He can't afford his villa and rents it out, only to have the tenants skip town; he lives across the hall from his Spanish son- in-law, a private detective who is in the midst of a nasty separation from his daughter; and things aren't perfect with his longtime girlfriend. As a favor to his son-in-law, Masters agrees to tail Sir Cecil Collins, a British tycoon whose wife wants proof that he's cheating. When a thug holds up Collins on a golf course, Masters intervenes with a seven iron and is instantly befriended by the tycoon. Complicating matters further are Lady Collins, who makes passes at Masters, and the thug's sister, a beautiful flamenco dancer who uses her charms to convince the actor that he should drop the charges against her poor brother. Adding to the cast of rather stock characters is the arrival of a mega-yacht filled with old Hollywood friends, including the mistress who caused Masters's banishment, who have come to take him back to California. There's plenty of action and little emotion in this cool, detached novel, which nevertheless spins an entertaining yarn about a protagonist coming to grips with always being the odd man out. Read full book review > 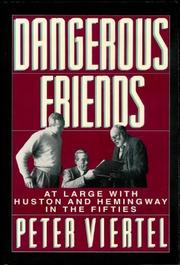 NONFICTION
Released: Aug. 1, 1992
DANGEROUS FRIENDS: AT LARGE WITH HUSTON AND HEMINGWAY IN THE FIFTIES
by Peter Viertel
NONFICTION
Released: Aug. 1, 1992
DANGEROUS FRIENDS: AT LARGE WITH HUSTON AND HEMINGWAY IN THE FIFTIES
by Peter Viertel
Reserved but involving memoir of novelist/screenwriter Viertel's lifelong friendships with John Huston and Ernest Hemingway, among other fabulous folk. Viertel (American Skin, 1983, etc.), son of a European theater director and of Sasha Viertel, scenarist of six movies for her buddy Greta Garbo, attended his mother's Hollywood Sunday soirees for Thomas Mann and other refugee literati, and at 15 met John Huston. Viertel finished his first novel at 18, worked on screenplays, and married Budd Schulberg's ex-wife, Jigee. After a second unsuccessful novel, and years as a Marine officer in European Intelligence in WW II, he wrote a Broadway play with Irwin Shaw, which failed, and then met his idol, Hemingway, while skiing in Idaho. Friendships with Hemingway and Huston could be rocky. When Huston hired Viertel to co-write We Were Strangers, a Havana- based melodrama, Hemingway accepted Huston and Viertel as guests at his Cuban home and gave them testy advice about their picture. Viertel's roman Ö clef White Hunter, Black Heart tells of hazarding the African jungle with Huston to film The African Queen. Viertel worked on many Hemingway scripts and followed the bulls with ``Papa'' for many years. Endless celebrities became deep friends: his agent Irving ``Swifty'' Lazar, Orson Welles, Ava Gardner, Robert Capa, Slim Hayward, Humphrey Bogart, Darryl Zanuck, Anatol Litvak, and a dozen more, who appear here in the flesh and full of obsessions. Viertel abandoned Jigee while she was pregnant, for a model who later abandoned him for Aly Khan. A marriage to Deborah Kerr has lasted about three decades. Not stylish, but honest. Viertel's most memorable book, and a likely big winner. (Forty b&w photographs—not seen.) Read full book review >