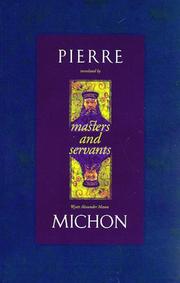 Released: Oct. 1, 1997
MASTERS AND SERVANTS
by Pierre Michon
Released: Oct. 1, 1997
MASTERS AND SERVANTS
by Pierre Michon
Michon offers a brilliant tour de force of five pieces about art and artists: an often indescribably eloquent modern taking up where Vasari, say, might have left off. The prevailing mood is melancholy, albeit in the service of the highest pursuits. ``Trust this Sign,'' is about the near-unknown Lorentino in the Quattrocento, who did in fact receive from Vasari only a few lines about the ``miracle'' of a farmer, when Lorentino's family was starving, appearing to offer a pig in exchange for the painting of a saint. And the resulting masterpiece? It hung in a country church, never seen by anyone influential, was later placed before a hole in the wall, and was reduced gradually—to dust. Slightly less engaging but equally attuned to the nuances and raw details of its time is Michon's study of the humble Goya's life in a fiercely class-bound Spain; and the same is true of the fine but clearly least ambitious, ``The King of the Wood,'' in which an illiterate boy herds pigs and sheep—until Claude Lorraine adopts him as a disciple, raising him to a princely caste. Without question, though, one of the truly great pieces here is the wrenching ``. . . Io mi voglio divertir,'' about the passionate life of Watteau, who wanted the love of all women but died at 38 (in 1721) racked by consumption—watching stacks of his own erotic paintings, by his own command, being burned. Most breathtaking, though, is ``The Life of Joseph Roulin,'' the postman who knew, and was painted by, Van Gogh, a simple man who came to understand that Van Gogh was ``someone who had believed so devotedly in this theory [of art] that he had become theory himself, ascended to almost the same height, and died of it.'' Stylistically demanding, but a book often as passionate, beautiful, and skilled as the paintings it springs from. Read full book review >