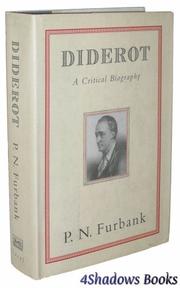 NONFICTION
Released: Nov. 6, 1992
DIDEROT: A CRITICAL BIOGRAPHY
by P.N. Furbank
NONFICTION
Released: Nov. 6, 1992
DIDEROT: A CRITICAL BIOGRAPHY
by P.N. Furbank
Philosopher, art critic, novelist, and co-editor of the EncyclopÇdie (the ``bible'' of the Enlightenment), Diderot enjoyed a reputation for wit, wisdom, and intellectual generosity—which is sustained in this admiring critical biography. But, as in his E.M. Forster (1978), Furbank sees his subject's ``dark'' side as well, obliquely revealed in Diderot's fiction. Aside from an early marriage to an unsuitable and shrewish wife, a liaison with a longtime mistress, and a relationship with his daughter AngÇlique, Diderot subordinated his personal life to his public life as a man of letters. But there are hidden emotional conflicts and mysteries suggested in Furbank's readings of Rameau's Nephew, The Nun, and Jacques the Fatalist. Furbank carefully traces the origins of Diderot's eclectic philosophy in Lucretius, Locke, Shaftesbury, and Hume; his many literary associations and quarrels (especially with Rousseau); his finances; his role in the pamphlet ``war'' over the relative merits of French and Italian music; his ``invention'' of art criticism; and his impact on European culture, especially on Lessing, Goethe, Zola, and August Comte, who, like many, considered Diderot the ``greatest man'' of the 18th century. While Diderot's dogmatic and impractical ideas on government alienated Catherine the Great, who thought he needed a ``keeper,'' Diderot was considered dangerous in France, where ideas were taken seriously enough for society women to hold salons for intellectual exchange and for philosophers to be imprisoned or exiled. It is that sense of the centrality of intellectual life that Furbank conveys, while intimating another nature—repressed, passionate, even bestial—hidden in Diderot's novels, short stories, and dramas, on which the biographer comments at length. Polite and respectful, with some fashionable allusions to Roland Barthes and M.M. Bakhtin. (Eight pages of photographs—not seen.) Read full book review >