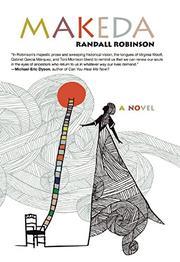 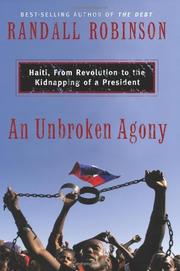 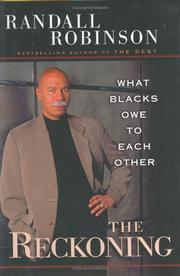 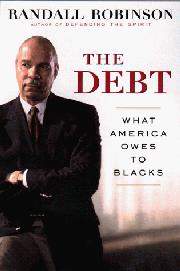 HISTORY
Released: Jan. 1, 2000
THE DEBT: WHAT AMERICA OWES TO BLACKS
by Randall Robinson
HISTORY
Released: Jan. 1, 2000
THE DEBT: WHAT AMERICA OWES TO BLACKS
by Randall Robinson
Robinson (Defending the Spirit, 1998), influential chief of the lobbying group TransAfrica, presents the long overdue bill, on behalf of America's blacks, for centuries of social and economic abuse. With the angry fervor of a street preacher and the artful rhetoric of a talented polemicist, Robinson's impassioned brief offers a sampling of little-known black history and the somewhat better-known story of slavery perpetrated by profiteering whites. (Little is said about Muslim influence or black participation in the evil trade.) That the ancient Egyptians were Africans as dark as any others is a given. Zipporah, wife of Moses, was black, too, claims Robinson. Such statements are beside the point. African-Americans are history's orphans, deprived of what is rightfully theirs: a proud and vital heritage. Like Shakespeare's Moor, they too have been of service to the state, from chopping cotton to helping build the Capitol. Still, despite their contributions, blacks continue to be abused and insulted. White journalists are blind to what blacks see clearly. US policy, says Robinson, blithely destroys Caribbean economies at the behest of Chiquita Brands and demands that the IMF impoverish African nations. Blacks are imprisoned for using crack cocaine while whites sniffing powder cocaine stay free. Socioeconomic gaps remain undisturbed by prejudice or conditioned expectations; those who do not expect better do no better. "Many blacks—most, perhaps, though I can't be sure—don't like America,— notes Robinson. Affirmative action isn't enough, he says. Since the legacy of slavery is poverty, America must pay for what it has cost the descendants of those who were stolen from their homes and deprived of their culture. Not since Malcolm X has there been such outraged discussion of white domination. Robinson is not optimistic that his message will be heard, but if the nation is to endure honorably, candid debate must begin on his jeremiad, whether or not cash reparations result. Read full book review > 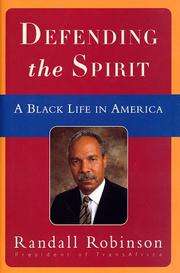 BIOGRAPHY & MEMOIR
Released: Feb. 2, 1998
DEFENDING THE SPIRIT: A BLACK LIFE IN AMERICA
by Randall Robinson
BIOGRAPHY & MEMOIR
Released: Feb. 2, 1998
DEFENDING THE SPIRIT: A BLACK LIFE IN AMERICA
by Randall Robinson
A remarkable behind-the-scenes look at race relations and the ways in which American foreign policy is crafted and, most importantly, changed. In an era in which apathy colludes with Americans' increasing interest in putting themselves first to create an America of near strangers, this book provides inspirational proof that we not only can but must fight the racial status quo. Robinson, the product of a family of doers (his brother, Max Robinson, was a successful TV broadcaster before he died from AIDS), has had a stunning impact on American race relations in recent decades. In 1977 he founded TransAfrica, the first organization devoted solely to raising awareness of and influencing foreign policies toward African and Caribbean peoples. Under his direction, it has grown from a two-person organization to a national lobbying group with more than 15,000 members. More importantly, it has almost single-handedly helped change the course of history, thanks in no small part to Robinson's drive and remarkable focus. Among the organization's accomplishments thus far: convincing American politicians to invoke economic sanctions against South Africa, helping to free Nelson Mandela, and pushing President Clinton to provide better treatment for Haitian refugees in America and to force the exile of that country's military dictators so that President Aristide could return from his exile. A driven man, Robinson has used everything from savvy public relations maneuvers—in his years as a community activist in Boston, he once stuck 1,000 black crosses in the snow on Harvard's campus to press the university to divest its portfolio of Gulf Oil stock—to hunger strikes to get what he thinks is fair. At once provoking and poignant, this memoir reminds the reader of the value of getting justice rather than simply getting mad. (First serial to Essence) Read full book review >