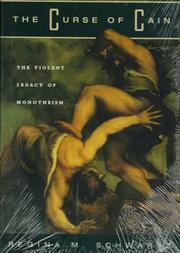 NON-FICTION
Released: June 1, 1997
THE CURSE OF CAIN: THE VIOLENT LEGACY OF MONOTHEISM
by Regina M. Schwartz
NON-FICTION
Released: June 1, 1997
THE CURSE OF CAIN: THE VIOLENT LEGACY OF MONOTHEISM
by Regina M. Schwartz
Schwartz (English/Northwestern Univ.; Remembering and Repeating, not reviewed) has written a strange, discomfiting book on the Bible's legacy of violence. The author uses the Bible as a lens to explore Western culture's heritage of violence, but defines violence in such a broad way—as ``acts of identity formation'' and ``the very construction of the Other''—that the reader is left wondering what isn't violent behavior. Indeed, the book is far more deconstructive than constructive; it is only in the last chapter that Schwartz rather generically envisions a Bible that embraces generosity and pluralism, not scarcity and a totalizing monotheism, as ethics to cultivate. The book also suffers from a certain eco-preachiness (as in such first-person assertions as ``we cannot really own anything''), which systematically undermines what is truly prophetic here. Yet there is also a coldly brilliant realism at work. Schwartz writes with style and verve, gracefully teasing out new meanings from the Bible's elusive Hebrew text. Her chapters on land and kinship are as insightful as they are disturbing. Particularly significant is her connection between monotheism, land, and female sexuality: Hosea's denunciations of the adulterous wife, for example, can be understood as more than an embrace of a strict moral code. The wife (who represents faithless Israel) has also violated Yahweh's property rights, because unlike a self-respecting whore, she doesn't even receive money for her favors, but pays her lovers. The story, Schwartz argues, is a metaphor for Israel's transgression of the boundaries of monotheism, which is basically ``a doctrine of possession.'' Ultimately, both monogamy and monotheism function to set a people apart in a covenant relationship—but, Schwartz reminds us, this otherness is always inherently dangerous, potentially violent. The construction of boundaries, Schwartz asserts, leads to nations, and then to bloodshed. Unfortunately, the few alternatives she offers are vague and touchy-feely. Read full book review >