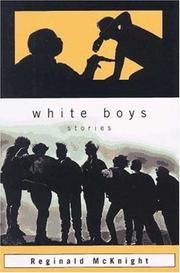 FICTION & LITERATURE
Released: Jan. 1, 1998
WHITE BOYS: STORIES
by Reginald McKnight
FICTION & LITERATURE
Released: Jan. 1, 1998
WHITE BOYS: STORIES
by Reginald McKnight
Four stories and a novella, linked by their depictions of conflict, mostly racial, in a second collection from McKnight (after The Kind of Light That Shines on Texas, 1992). There's nothing particularly distinctive about McKnight's storytelling, though he tries for affect with first-person narratives. Still, the voices here all sound alike, though two shorter pieces—``He Sleeps'' and ``Palm Wine''—do seem to be told by the same character. Both concern an African-American researcher in Senegal who's collecting proverbs for his dissertation in folklore. In the first, he finds himself dreaming fecund narratives that reflect both the sexual mess he left back home and the torrid lovemaking he overhears in the next room. His retellings, though, are deflated by his native guide, who reminds him that dreams mean only one thing—you're asleep. The narrator's increasing frustration with the Senegalese leads to a lot of bad vibes (and defeats any sense of Roots-y solidarity). In the latter story, his quest for the legendary native elixir leaves the teller where he began: queasy, suspicious, and angry. The slangier narrators of ``The More I Like Flies'' and ``Boot'' complain about life stateside. The first is told by a young black civil servant who works in the Air Force Academy kitchen and resents his co-workers for their lack of sympathy and, once, their racial commentaries. Race matters less in ``Boot,'' about hierarchical conflict in the military and the narrator's regret that he sided with a whiny complainer rather than with his D.I. The long title piece explores interracial life on an Air Force base in Louisiana, where a bootstraps-and-stern-minded African-American family moves next to a white family whose racial attitudes are far more confused than anyone realizes, including a legacy of miscegenation, lust, do- gooderism, and simple friendship, all coming out in twisted fashion. Cultural conflict and racial wounds: McKnight sounds few unusual notes in this competent if not compelling volume. Read full book review > 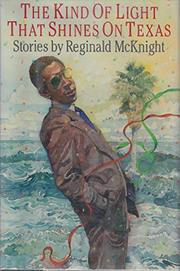 FICTION & LITERATURE
Released: Feb. 4, 1992
THE KIND OF LIGHT THAT SHINES ON TEXAS: STORIES
by Reginald McKnight
FICTION & LITERATURE
Released: Feb. 4, 1992
THE KIND OF LIGHT THAT SHINES ON TEXAS: STORIES
by Reginald McKnight
Evocative stories about the middle class, mostly African- American and male, in search of themselves, from McKnight (I Get on the Bus, 1990; Moustapha's Eclipse, 1988). In settings ranging from a mythic past, with a detour through hell to a totalitarian and divided US of the future, McKnight's characters, consistently sensitive and serious, try to survive in a world where both men and women must be approached with wariness, racism is endemic, and love is at best equivocal. A brilliant and talented young man, rejected by the woman he loves, flees to an Atlantis-like continent where he writes his great life's work—but in the process also realizes that he has forgotten the name of his beloved (``The Homunculus: A Novel in One Chapter''). In the O. Henry Award-winning title story, a young middle-class black boy, whose father, a professional soldier, is serving in Vietnam, must confront his feelings about his racial identity when a despised fellow black classmate rescues him from a bully. In other notable pieces: a sensitive and shy young man, devastated by his mother's death, overdoses on drugs and lands in Hell, where he must be the endless life of a party (``Roscoe in Hell''); a grandmother, watching her daughter violently beat her misbehaving grandson, realizes that the ``sickening hissing fire she heard'' went right back through herself to the ``generations of slaves and slave- keeper'' (``Into Night''); and another young man, once in the army, remembers in ``Peacetime'' ``a pretty weird time'' with friends, now dead, who almost deserved a war—``to give these guys something to do.'' Some stories work better than others, but McKnight—to his credit—tries to find a distinctive voice, neither macho nor maudlin, as he explores the big three: race, class, and gender. A writer to watch. Read full book review >