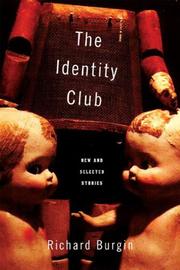 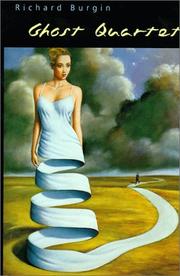 FICTION & LITERATURE
Released: Nov. 1, 1999
GHOST QUARTET
by Richard Burgin
FICTION & LITERATURE
Released: Nov. 1, 1999
GHOST QUARTET
by Richard Burgin
Burgin, author of three well-received story collections (Fear of Blue Skies, 1997, etc.), hits several sour notes in a tedious novel that exhaustively analyzes the emotions of a young classical composer who trades sex for career advancement. Ray Stoneson's passive homosexual relationship with his idol and eventual mentor, celebrated —triple-threat man in music——i.e., composer-conductor-solo pianist—Perry Green (30 years his senior, and a dead fictional ringer for Leonard Bernstein) has developed, as Ray realizes, because of his own "fear of being an ordinary person.— Indeed, thanks to Perry's considerable influence, the younger man's work quickly receives highly visible public performance and possibly lucrative recording contracts. But the combination of Ray's troubled conscience, the loss of his girlfriend Joy (ostensibly a gifted singer, but a completely unconvincing character), and the objections of Perry's other current lover, an unstable young actor named Bobby, signal the end of the guilty affair, leaving Ray to his own devices and his own company. This is glum stuff: soap opera without that genre's trashy energy, redeemed only in part by Burgin's obviously thorough knowledge of the worlds of classical music and performance (the story is set mainly in New York City and the environs of Tanglewood in Massachusetts's Berkshires). And the mood isn—t exactly lightened by numerous lengthy conversations in which characters essentially provide exposition by describing one another in fulsomely flattering terms, or worry ad nauseam about contracting AIDS, either before or instead of having sex. Misconceived from start to finish: an embarrassment. Read Burgin's short stories instead. Read full book review > 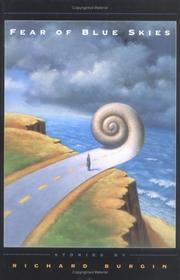 FICTION & LITERATURE
Released: Dec. 12, 1997
FEAR OF BLUE SKIES
by Richard Burgin
FICTION & LITERATURE
Released: Dec. 12, 1997
FEAR OF BLUE SKIES
by Richard Burgin
A third collection from Burgin (Private Fame, 1989; Man Without Memory, 1991), who teaches at St. Louis University and also edits the quarterly Boulevard. The protagonists of these 11 stories are lonely people who've been hurt by their pasts, and become hesitant to test the dangerous waters of new circumstances or relationships. They aren't safely anchored to the real world, or even to their own inner selves, and many are still bound, well into middle age, to elderly or deceased parents or to spouses or lovers long since gone. Burgin's prose is dreamy and meditative, and the flat rhetoric that dominates his stories often has the surely unintended effect of making his characters' idiosyncracies seem hopelessly remote from us. For example, the narrator of ``The Park,'' finding solace neither with the woman he covets nor in the fabricated beauty of the public park he compulsively visits, achieves an unspecified (and unconvincing) gratification when he meets an elderly woman and carries her groceries home for her. But what literally happens in the piece simply isn't enough to allow us entry into the character's mind and heart. A few other tales feel similarly thin, but there are several impressive successes. The fine title story shows how a withdrawn young man, afflicted by a recurring dream of floating heavenward and simply disappearing, resolves this trauma by manufacturing a ``durable memory.'' And in the haunting ``My Sister's House,'' a ``gypsy scholar,'' who has never put down roots or settled into a relationship, assesses what differing effects his parents' ``house full of secrets'' has had—on his own stunted development, as well as on his sister's contented lesbian marriage. These odd, quirky glimpses of lives lived beneath the surface or on the fringe of ``normal'' behavior only intermittently strike sparks of recognition in us. But the best of them are all too familiar and won't be easily forgotten. Read full book review > 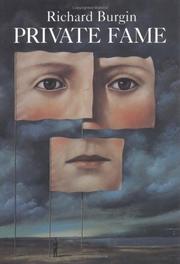 FICTION & LITERATURE
Released: Sept. 1, 1991
PRIVATE FAME
by Richard Burgin
FICTION & LITERATURE
Released: Sept. 1, 1991
PRIVATE FAME
by Richard Burgin
Like Man Without Memory, Burgin's recent Illinois Short Fiction Series collection (1989), these 11 stories, often absurdist and minimalist, involve a male who's disoriented or obsessed, though here the author includes several women as well. The best are lively, but many read like leftovers. ``Psycho in Buckingham Palace'' is the story of a friendship from childhood through college. The narrator gets involved with Lester, or ``Psycho,'' and, much later, with his sister, whom Psycho lives with. The narrator goes to law school, while Lester, downward-bound, drives a cab, goes off the edge, and steals some money. ``Song of the Earth'' is a study of a manipulative relationship between Ray, a journalist, and influential conductor Perry. The two play a cat-and-mouse game, Ray after Perry's influence, Perry after Ray's bod, and finally Ray cynically allows himself to be seduced in an apt conclusion. In ``The Horror Age,'' a father arranges jobs and apartments for his daughter, the narrator, ``the kind of person who always sees signs in everything.'' The daughter at last confronts her father about childhood sexual abuse (in the wake of her mother's desertion) in an ending that is suitably tense but a little flimsy. Of the rest, ``The Spirit of New York'' is about a man who jumps out to ``scare people, usually women,'' but its sense of menace is a little too easily come by; in ``From the Diary of Gene Mays,'' a narrator who is ``vertically cohabiting'' with his lover (she lives in a different apartment in the same building) comes across a painting that ``began to have therapeutic value,'' visits the artist, and decides that ``The Earth is God's painting....'' Again, lively but a bit easy. Occasionally engaging tales of malaise and innocent perversion, though the vision that guides them is neither fresh nor consistently original. Some appeared in the Missouri Review, the Kansas Quarterly, TriQuarterly, and the Denver Quarterly. Read full book review >