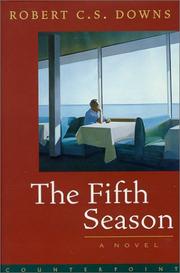 FICTION & LITERATURE
Released: Feb. 1, 2000
THE FIFTH SEASON
by Robert C.S. Downs
FICTION & LITERATURE
Released: Feb. 1, 2000
THE FIFTH SEASON
by Robert C.S. Downs
The Fifth Season is also Downs's fifth novel (Living Together, 1983, etc.): a small gem that details the poignant realities of old age as a 60-year-old son, trying to help his ailing parents, confronts old tensions and mortality'his and theirs. On his sabbatical, English professor Teddy Neel visits his parents, Able and Lillian, in Florida. In their 90s, they live in a seaside apartment in Fort Lauderdale, a place sparely yet vividly evoked in Downs's wonderfully wrought prose. Now in that fifth season of life, whose end is death, the two are confronted by such harbingers of their demise as cancer and Alzheimer's. Able, a former businessman who never understood Teddy's choice of profession, is recovering from an operation to remove a malignant kidney, and Lillian's short-term memory is deteriorating. Teddy meticulously describes the way his parents live: the freezer filled with frozen dinners; his mother, whose eyesight is deteriorating, wearing the same stained outfit each day; and meals eaten at the local yacht club with other elderly couples. His efforts to help, however, are undercut. Able, refusing to go to a retirement home, insults the black woman Teddy hires to take care of Lillian, and, when she leaves, Able stubbornly insists he can look after his own wife. Teddy, who can't make his father acknowledge Lillian's vulnerable condition, returns home, but the next year Able, driving without a license, has an accident: Although he's unhurt, Lillian is hospitalized. Back in Florida, Teddy finally talks frankly with Able, rifts are healed, and the elder Neel, his cancer back, admits he can no longer take care of Lillian on his own. Understanding that within a year his parents may both be dead, Teddy finds some comfort in the peace he's made with Able and in the epiphany he has as he sees, behind the shining sun, the great blaze of eternity. A seamless mix of clear-eyed reportage and heartbreaking emotion. Read full book review >