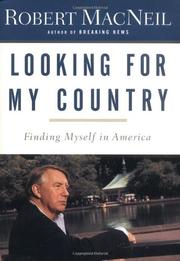 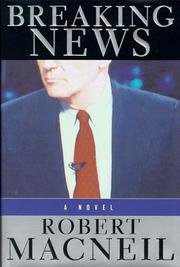 FICTION & LITERATURE
Released: Nov. 1, 1998
BREAKING NEWS
by Robert MacNeil
FICTION & LITERATURE
Released: Nov. 1, 1998
BREAKING NEWS
by Robert MacNeil
TV newsroom tell-all from the former PBS co-anchor. The third from MacNeil (The Voyage, 1995, etc.) aspires at once to intelligence and roman-Ö-clef sleaze. The brainy stuff occurs in a witty recasting of All About Eve, as good-looking, overpaid, aging but ethically responsible BBS TV news-anchor Grant Munro, after publicly comparing his colleagues to the biblical Gadarene swine that have been maddened by evil spirits, finds himself fighting for his job: he may be replaced by a good-looking, not-yet-overpaid, young, and ethically questionable Washington correspondent named Bill Donovan. The sleaze bubbles merrily as the beautiful, overpaid, connivingly manipulative news twinkie Ann Murrow (she changed her name from Malakoff so people might mistakenly think she was kin to the legendary Edward R.) copes with a loathsome blackmailer threatening to sell Penthouse a set of sexy photos she—d posed for when she was a not-so-famous Minneapolis weather girl. Trying to make sense of it all is fatuous Time journalist Christopher Seifert, who naively assumes he can suppress his jealousy of Munro's fame and fortune while profiling him, and the Internet gossip queen Holly Golightly, an apparent newsroom insider who gleefully dishes the dirt on both. Implying that TV news veers perilously between extremes of reasoned inquiry and sensationalist trash, MacNeil shows us the scheming agents, dissembling broadcast executives, and disgusting supporting types driven crazy by the medium's ratings lust. Beyond portraying his characters as posturing victims of situations they can—t change, MacNeil offers few new insights other than the unstated assumption that, just as with the similarly corrupted industries of professional sports, publishing, music, and film, the world of TV news might be a better place if most of the folks at the top weren't so well paid. A zesty blend of froth and fury that, despite its unevenness, should be MacNeil's most commercial book yet. (Author tour) Read full book review > 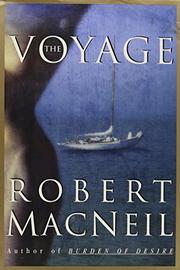 FICTION & LITERATURE
Released: Oct. 1, 1995
THE VOYAGE
by Robert MacNeil
FICTION & LITERATURE
Released: Oct. 1, 1995
THE VOYAGE
by Robert MacNeil
Newsman MacNeil follows 1992's much-lauded Burden of Desire (1992) with this smoothly told if soap-operatic tale of a long and sweaty affair between a Canadian diplomat and a Caribbean fashion model. David Lyon is Canada's Consul General in New York, a 52-year- old career diplomat who's just been asked by Prime Minister Brian Mulroney to consider an appointment as Minister of External Affairs. While Lyon mulls over the offer, a phone call alerts him that a boat, registered to one Francesca D'Anielli and bearing a letter addressed to him, has been found floundering off the coast of Finland. The call triggers a flood of memories about his ten- year affair, now ten years past, with Francesca, whom he'd met on a fact-finding mission for then PM Pierre Trudeau. David was a young diplomat on the move: handling a plum posting in Washington, married to the heavy-thighed and infinitely compassionate daughter of a great diplomat, and the father of two young children. (He was also politically insightful, and his dissections of Canada's Trudeau years make for the book's most interesting sections.) Enter Francesca, not yet 20, the slim and gorgeous daughter of British expatriates. David, spouting drivel about having locked himself into domesticity too early, began sleeping with her. As his career proceeded to postings in Canada, Zambia, Finland, she became a flight attendant, flying the globe to meet him, then a fashion model. Their happiest time together was a sailing trip in Finland, where they made a drunken promise to return on Francesca's 40th birthday. And though David called it quits, she keeps their pledge and, hoping meanwhile to carry out a silly plot to shock David, sails from the coast of Finland alone. This could easily have been the Bridges of Ottawa County, but MacNeil's strong voice drives his stock characters through their long deception and shows some true insight into human longing. A lightweight but enjoyable read. (Author tour) Read full book review > 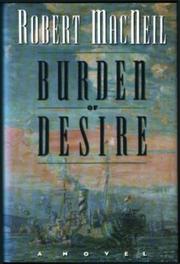 FICTION & LITERATURE
Released: March 9, 1992
BURDEN OF DESIRE
by Robert MacNeil
FICTION & LITERATURE
Released: March 9, 1992
BURDEN OF DESIRE
by Robert MacNeil
PBS newsman MacNeil's first novel is about sex and war and love and loyalty and civic calamity in early 20th-century Halifax. It's intelligent, balanced, polished, and reasonable as you might expect; the high artistry is a very pleasant surprise. In the middle of WW I, as the citizens of Halifax, Nova Scotia, struggle to keep faith in King and empire despite disproportionate casualties among Canadian troops, there is a domestic disaster on the scale of the San Francisco earthquake or the Chicago fire: A French ship loaded with munitions and fuel catches fire and explodes, leveling the north end of the city. In the ensuing confusion the diary of Julia Robertson, a beautiful young matron, falls into the hands of Peter Wentworth, an ambitious Anglican clergyman, who reads the book through and becomes obsessed with the writer without, at first, knowing who she is. Julia, whose army officer husband has been two years at the front, has set down explicitly her sexual history and feelings. The diary and the disaster combine to do serious damage to all of Peter's careful constructions of faith and honor. He passes the book to his boyhood friend Stewart MacPherson, a budding Freudian analyst, who becomes every bit as interested in the author as Peter but in a much healthier way. Before things sort themselves out, Stewart has a go at straightening out a shell-shocked soldier; Peter's marriage nearly disintegrates and his career skyrockets; and Julia copes with her husband's heroic death and last disturbing letters. A very sharp examination of a bitter time in a modest place. MacNeil writes wonderfully well and has a great deal to say about intelligent, middle-class people trying to sort things out in the face of calamity. Read full book review >

Released: March 30, 1989
WORDSTRUCK: A MEMOIR
by
Released: March 30, 1989
WORDSTRUCK: A MEMOIR
by
From the co-host of the MacNeil-Lehrer Newshour (author of The Right Place at the Right Time and The Story of English), a warm and embracing memoir of a childhood in Halifax, Nova Scotia, constantly touching upon the author's ongoing romance with the English language and its literature. Although not unusual for its time and class, MacNeil's childhood was distinct and full of character—and is charmingly related here. His father, married on the promise of a sales job, lost all prospects in '29. Out of work for four years, he joined the Royal Canadian Mounted Police as a recruit, and quickly rose in the Marine Division—commanding ships by WW II. All those nights at sea, Dad was reading Conrad, Proust, and Joyce while Mom, waiting at home, read to their son. Between the two, Robert MacNeil became fascinated with books, an early reader. He relates engaging and sometimes funny specifics of his childhood—ice-skating; choir practice; shoplifting—and how, as a young man, aimed for the Navy like his father, he changed his path when he was bitten by the acting bug, leading to his career in broadcasting and journalism. But the center remains his experience of the language. Talking about Winnie the Pooh, Robert Louis Stevenson, Shakespeare, Eliot, and Dylan Thomas, MacNeil shares his ongoing discovery of the uses and forms of the English language. Although discourses on word origins tend to interrupt the flow, this is an interesting life related in a pleasant and readable manner. Read full book review >