BIOGRAPHY & MEMOIR
Released: May 1, 1997
FEATHER: A CHILD'S DEATH AND LIFE
by Robert Peters
BIOGRAPHY & MEMOIR
Released: May 1, 1997
FEATHER: A CHILD'S DEATH AND LIFE
by Robert Peters
Disjointed yet strangely affecting, a lyrical collage of memories surrounding a four-year-old's brief life and sudden death. Poet, author, and former University of California literature professor Peters (For You, Lili Marlene: A Memoir of World War II, 1995, etc.) provides impressionistic glimpses into his young son's life and death and its impact on him. When Richard (Feather was a nickname coined by his sister) was born, Peters, then a struggling academic constantly moving from one locale to another, and his wife, Jean, were already the parents of two young children. The author illuminates those times with lyrical snapshots of such things as a salamander hunt, a family-run summer school, and the hectic preparations for Thanksgiving dinner. Despite strains in the marriage—only vaguely hinted at here—the Peterses' life is enviable in its innocence. All this was shattered one day in 1960 when Feather returned home from nursery school ill, and swiftly died from a particularly vicious strain of meningitis. Numbness, shock, and horror transfixed the family. But Feather, in a sense, continues to live on for Peters. ``In May, 1961,'' he writes, ``I am in my study reading . . . I feel a tap on my shoulder, look up, gaze through a window at a lilac shrub in flamboyant bloom, and there I see Feather smiling at me! His image has ever since remained.'' Though Peters and his wife had another child, Jefferson, born only a year and seven months after Feather's death, their marriage dissolved, and Peters became involved in homosexual relationships. Writing elegiac poetry about Feather (included here) is one way in which he has dealt with his giref. The memoir closes with a bittersweet scene at Feather's grave, where Peters is joined by Jefferson and his wife. More poetic than prosaic, this memoir has an uncommon, haunting beauty. (15 b&w photos, not seen) (Author tour) Read full book review > 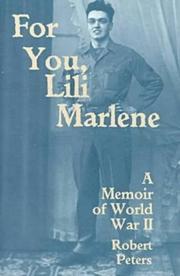 BIOGRAPHY & MEMOIR
Released: Dec. 1, 1995
FOR YOU, LILI MARLENE: A MEMOIR OF WORLD WAR II
by Robert Peters
BIOGRAPHY & MEMOIR
Released: Dec. 1, 1995
FOR YOU, LILI MARLENE: A MEMOIR OF WORLD WAR II
by Robert Peters
Vapid reminiscences of rear-echelon service with the US Army during WW II. Drafted in 1943 shortly after he graduated from high school in rural Wisconsin, poet and memoirist Peters (Crunching Gravel, 1988, etc.) wasn't much of a soldier. During basic training, he was the company's barber in garrison and the captain's runner on maneuvers. Subsequently seconded to the regimental newspaper, he was saved from the nasty, brutish, and short life of a rifleman by a personnel sergeant who made him a clerk-typist on the eve of his departure for England. Posted to France five months after the Normandy invasion, Peters and his fellow Remington raiders trailed the ground troops advancing on Nazi Germany at a safe distance. Assigned to occupation duty near Heidelberg as a battalion sergeant-major, he had a comparatively agreeable time of it before his discharge in the spring of 1946. Peters evidently means to suggest that the military holds a host of perils, moral and otherwise, even for those who never come under fire. A virginal youth who planned a career in the Lutheran ministry, the author experienced ambivalent sexual longings in the barracks and on the streets of bombed-out cities. Strongly attracted to several of his comrades in secretarial arms at a time when homophobia was a matter of policy in America's armed forces, Peters nonetheless managed some angst-ridden liaisons with young women in Germany and Paris (where he attended a gloriously evocative concert by Marlene Dietrich). The problem for readers is that his narcissistic recollections have distance but no perspective. Donne notwithstanding, the youthful Peters emerges as a narrow, self-absorbed island in the sea of destruction and human misery that engulfed the Continent before the guns fell silent. (13 b&w photos, not seen) Read full book review >