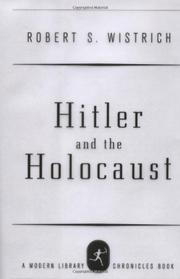 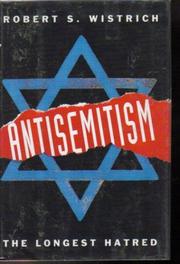 NON-FICTION
Released: Aug. 1, 1992
ANTISEMITISM: THE LONGEST HATRED
by Robert S. Wistrich
NON-FICTION
Released: Aug. 1, 1992
ANTISEMITISM: THE LONGEST HATRED
by Robert S. Wistrich
The companion volume to a three-part TV series shown this spring on PBS. Wistrich (Modern European History/Hebrew Univ. of Jerusalem; Hitler's Apocalypse, 1986, etc.) provides a history of anti-Semitism from pre-Christian times through the Holocaust and goes on to survey contemporary anti-Semitism in the US, Europe, and the Middle East. In his relatively brief text, Wistrich can give his subject only a once-over-lightly. The result is practically an almanac of names, dates, and places, though it makes a useful introduction to deeper reading and reveals lines of continuity—for example, between Catholic and Reformation demonizing of Jews as Christ- killers and the Nazis' depersonalizing campaign. But there are gaps and mistaken emphases. The British response to the Holocaust gets half a sentence. The German left of today is called anti-Semitic for voicing criticism of Israeli West Bank behavior milder than that of some Israeli observers themselves. The illustrations—anti- Jewish propaganda from the Middle Ages to the present—while necessary, are so offensive that they make one cringe. In fact, this is a dispiriting book in both subject matter and treatment. In subject matter, because Wistrich—whether necessarily or not- -emphasizes the role of intellectuals in fomenting murderous hatred of Jews: St. Augustine, St. Jerome, St. Thomas Aquinas even, and on to Voltaire, Renan, Marx (only Nietzsche comes out well); and where anti-Semitism is in abeyance, it's often because other minorities are also targets of race hatred. As for treatment, though, Wistrich concentrates on how, not why. He gives us lots of facts and summary historical analyses, but he doesn't begin to try to explain why hatred of Jews has persisted for millennia, or—the book's biggest failure—why, after all the pogroms, massacres, and expulsions he lists, Jews survive and even flourish as individuals and in communities. A few heroes, a little good news to leaven the bad, would have made this a more edifying work. (B&w illustrations—24 pages—not seen.) Read full book review >