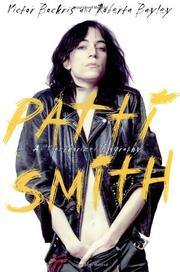 BIOGRAPHY & MEMOIR
Released: Sept. 1, 1999
PATTI SMITH: A BIOGRAPHY
by Victor Bockris, Roberta Bayley
BIOGRAPHY & MEMOIR
Released: Sept. 1, 1999
PATTI SMITH: A BIOGRAPHY
by Victor Bockris, Roberta Bayley
Lou Reed and Keith Richards biographer Bockris offers the first full-length portrait of —70s rock icon Patti Smith, a woman whose charismatic live shows and uncompromising music earned her the moniker "The High Priestess of Punk." As a poet-turned-rock-critic-turned-musician, as a friend of Bob Dylan, best friend of photographer Robert Mapplethorpe, and as a lover of playwright/actor Sam Shepard and Basketball Diaries author Jim Carroll, Smith was in the hub of the vibrant New York arts scene throughout the —70s. Bockris concentrates heavily on that angle, slipping in famous names wherever possible and writing extensively about himself in the "Seventh Heaven" chapter, named after Smith's first published collection of poetry, which Bockris and his then partner, Andrew Wylie, were responsible for bringing to the public. But then it's also worth noting that Bockris obviously had no contact with Smith for this book. It's interesting to note because Smith, since returning to the public eye in 1996 after a long absence, has not been reclusive. Smith's lack of involvement with Bockris greatly diminishes the reader's feeling of gaining access to her life. Even more importantly, one can't help but think that if one truly wanted to learn about Smith, one would be better off picking up any one of the number of interviews she's granted, or last year's book The Complete Patti Smith, a collection of her lyrics, other writings, and photographs. There, in her complete works, music fans see how Smith, as a musician, has influenced acts from Nirvana to U2 to R.E.M. Also there, in her own words, is the strength she's shown as a person, in overcoming the deaths of her husband, best friend (Mapplethorpe) and brother (Todd) in the span of a year. Smith is indeed a worthy subject for a biography. But she and her many fans deserve better than this sometimes sensationalistic, second-hand account of her life. Read full book review >