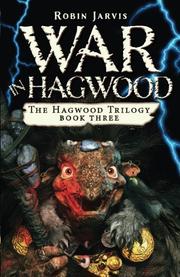 CHILDREN'S
Released: July 26, 2016
Reviewed: May 4, 2016
WAR IN HAGWOOD
by Robin Jarvis
CHILDREN'S
Released: July 26, 2016
WAR IN HAGWOOD
by Robin Jarvis
"A comfortably formulaic woodland epic finds resolution in widespread slaughter and melodramatic flourishes. (Fantasy. 10-12)"
The (literally) heartless queen of the Unseelie Court meets her thoroughly deserved fate at last at the hands of some of the forest's humblest residents in this trilogy closer. Read full book review > 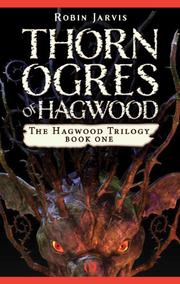 CHILDREN'S
Released: June 4, 2013
Reviewed: May 1, 2013
DARK WATERS OF HAGWOOD
by Robin Jarvis
CHILDREN'S
Released: June 4, 2013
DARK WATERS OF HAGWOOD
by Robin Jarvis
"It offers some creepy moments and critters, but it's more often a pale imitation of one of Brian Jacques' woodland epics. With slime. (Fantasy. 10-12)"
Over 10 years after Thorn Ogres of Hagwood (2002), a middle volume appears, doing more to indulge the author's love of grotesque magical creatures than advance his derivative plotline. Read full book review > 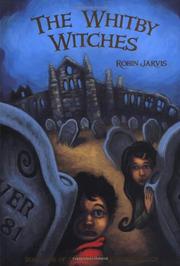 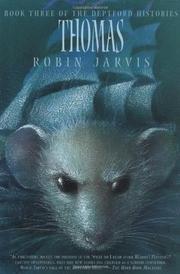 ADVENTURE
Released: Aug. 1, 2006
THOMAS: BOOK THREE OF THE DEPTFORD HISTORIES
by Robin Jarvis
ADVENTURE
Released: Aug. 1, 2006
THOMAS: BOOK THREE OF THE DEPTFORD HISTORIES
by Robin Jarvis
A rousing tale of horror and heroism, this last prequel to the Deptford Mice trilogy stands well alone, as the doughty shipmouse Thomas Triton at last reveals his tragic past. Thomas, then surnamed Stubbs, and his best friend, the sensitive fieldmouse Woodget Pipple, are led through a romantic misunderstanding and a dockside scuffle into a wild seafaring adventure with the peg-legged Mulligan and the lackwitted Dimlon (neither quite what they seem). They are then drawn inexorably into the ancient battle between the noble Green Council and the vile Scale, plotting to restore the grisly domination of the serpent-demon Scaraphion. Deptford fans know just what to expect: overstuffed plots, dense with tragedy and treachery and true friendship, rife with occult allusions and an undercurrent of brooding menace. The heroes are stalwart and true; the villains sadistic and grotesque; and the nonstop action builds through gruesome gusts of shuddering violence to an apocalyptic climax and a bittersweet epilogue. Backwards are the sentences shaped, and deep the clauses piled; lush and vermilion are the adjectives thereof. The end result ought to be risible, but Jarvis pulls it off, to stunning effect. (Horror. 10-14)Read full book review > 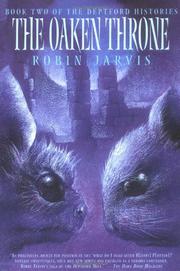 ANIMALS
Released: Oct. 1, 2005
THE OAKEN THRONE: BOOK TWO OF THE DEPTFORD HISTORIES
by Robin Jarvis
ANIMALS
Released: Oct. 1, 2005
THE OAKEN THRONE: BOOK TWO OF THE DEPTFORD HISTORIES
by Robin Jarvis
This second prequel to the Deptford Mice animal fantasies stands on its own, while adding depth to Jarvis's richly imagined world. With the betrayal of the Starwife, priestess of the squirrel clans, the sacred realm of Greenreach falls to the bats, enraged over the perceived theft of their prophetic birthright. The squirrel princess Ysabelle, revering duty above all, is called to restore the magical Silver Acorn and repel the invaders. Ysabelle gathers a motley assortment of unlikely assistants, notably the bat Vesper, once a prisoner eager to slaughter the "tree rats," now her passionately devoted knight. Their quest leads through cruelty, treachery and grisly death, but also sacrifice, courage, grace and unexpected love. The sickening body count is balanced by a rarified air of occult mystery, filled with lush description, archaic language and cryptic allusions. Despite these veiled hints of an underlying supernatural conflict, the characters and their dilemmas remain immediate and exquisitely drawn. Through the failings of their virtues and the strengths of their faults, the all-too-frail heroes achieve victory over loathsome powers—but at a heartbreaking personal cost. A perfect choice for fans of the Redwall series ready for richer fare. (Fantasy. YA)Read full book review > 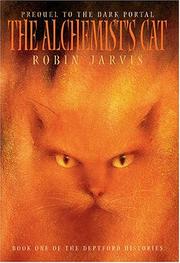 FANTASY
Released: Oct. 1, 2004
THE ALCHEMIST’S CAT: BOOK ONE, THE DEPTFORD HISTORIES
by Robin Jarvis
FANTASY
Released: Oct. 1, 2004
THE ALCHEMIST’S CAT: BOOK ONE, THE DEPTFORD HISTORIES
by Robin Jarvis
The first of three prequels to the popular Deptford Mice trilogy details the dark backstory of the malevolent feline mage Jupiter. But this tale's hero (unusual for Jarvis) is human: young orphaned Will Godwin, adrift in the perilous London of 1664. On the run from a false accusation of murder, the boy falls into the clutches of the alchemist Elias Spittle. Virtually enslaved, kindhearted Will rescues a cat and her three newborn kittens, unwittingly triggering a tragic sequence of sorcery, betrayal, and violence. But the few sympathetic characters serve as little more than foils to the various villains, splendidly drawn, displaying all the hues and shades of evil. Spittle especially appears at first to be a mere caricature of vicious buffoonery; but plummeting from spite to necromancy to madness, he draws the cats inexorably into his diabolical descent. Jarvis's florid, purple-tinged prose presents London—with her filthy alleys and crime-ridden alehouses, her overgrown cemeteries and plague-haunted streets—as a major player in the unfolding disaster. Meanwhile, ghastly revelations pile upon grisly tableaus as the plot hurtles towards a spectacular final conflagration amidst London's Great Fire. A crackerjack creepfest. (Fantasy. 10+)Read full book review > 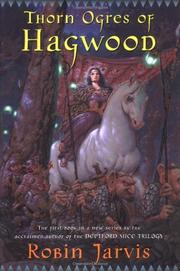 CHILDREN'S
Released: Oct. 1, 2002
THORN OGRES OF HAGWOOD
by Robin Jarvis
CHILDREN'S
Released: Oct. 1, 2002
THORN OGRES OF HAGWOOD
by Robin Jarvis
The author of the Deptford Mice trilogy extends his trademark blend of fantasy and horror into an entirely imaginary world. In a remote corner of Hagwood reside the werlings, a tiny folk who, like the hedgehog, know one big thing—in their case, the art of "wergling," or shape-changing. But young Gamaliel Tumpin miserably fails to master it, subjecting him to mockery from his bossy sister, his oafish schoolmates, and his acidulous teacher, despite kindly support from the wergling wunderkind Finnen Lufkin. While on a class trip under Finnen's supervision, Gamaliel and some fellow students run afoul of the ghastly Frighty Aggie, a legendary wergler horribly malformed by indulging in the craft's forbidden aspects. Saved by the Wandering Smith, a fugitive from the Faerie court, they are horrified to learn that the vicious Queen threatens their peaceful existence. The Smith has stolen the secret of her one vulnerability, and she has sent her monstrous Thorn Ogres to retrieve it; and now the forgotten race of werlings are in the way. Jarvis (The Final Reckoning, p. 1034, etc.) grants his werlings a credible society and an intriguing talent, and shifts adeptly from conjuring the blood-pounding horror of Frighty Aggie's grisly lair to evoking the haunting serenity of the werlings' mystical burial grove. While the twee names and one-note characterizations do grate in the slow-paced beginning, the narrative gradually builds tension to a furious, action-packed climax. Fantasy adventure fans will be grateful for the cliffhanger ending that promises another installment. (Fiction. 10-15)Read full book review > 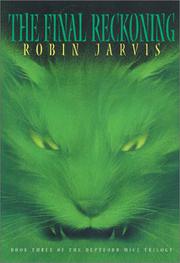 THE FINAL RECKONING: VOL. III, THE DEPTFORD MICE TRILOGY
by Robin Jarvis
A crescendo of savage horror, relieved only by a few grace notes of tender poignancy, make a gripping page-turner of this finale to the Deptford Mice trilogy. The spirit of Jupiter, the sorcerous cat, has returned as the Unbeast, more malevolent and powerful than ever. Having seized the magical Starglass, he plans to plunge the world into eternal wintry darkness. Meanwhile, Jupiter's erstwhile lieutenant has gathered an army of rats in the sewers of London, whipping them into a ravenous frenzy against the Holeborn mice. Against these evil forces stand only the mice of Deptford: temperamental Audrey, her rotund brother Arthur, the albino runt Oswald, the stalwart midshipmouse Thomas Triton, and the savvy city mouse Piccadilly. Armed with the wisdom of the frail squirrel Starwife and the ancient mystical lore of the bat councils, they set out to do the impossible: defeat an enemy who has already conquered death. Jarvis (The Crystal Prison, 2001, etc.) pulls out all the stops here, setting scenes of gruesome ferocity in an eerily unfamiliar London, whose human inhabitants huddle offstage while clammy fogs and icy gales freeze the city in their iron grip. While some might find his animals excessively anthropomorphized, the extreme situation has brought a new depth to their hitherto flat personalities. The most unlikely heroes reveal unsuspected reserves, and more than one beloved character pays the ultimate sacrifice. After all the violence and grief, the ultimate resolution is surprisingly warm, gentle, and achingly bittersweet. A superlative conclusion to a top-notch series. (Fiction. YA)Read full book review > 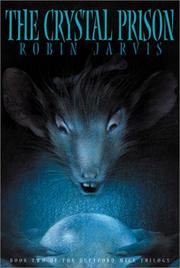 ANIMALS
Released: Sept. 1, 2001
THE CRYSTAL PRISON
by Robin Jarvis
ANIMALS
Released: Sept. 1, 2001
THE CRYSTAL PRISON
by Robin Jarvis
Redwall meets Goosebumps in the middle of the Deptford Mice Trilogy. Frivolous young Audrey is assigned to accompany the rat fortune-teller Madame Akkikuyu, who lost her wits after confronting the sinister Jupiter, and now fantasizes that Audrey is her best friend. Audrey, her brother Arthur, and their friend the fieldmouse, Twit, escort Akkikuyu to Fennywolde, Twit's rural home. But this once-idyllic enclave is now terrorized by a barn owl's predations, and dispirited by the puritanical ranting of Isaac Nettle, devotee of the Green Mouse. While Akkikuyu's bravery and healing potions win the hearts of the Fennywolders, Audrey's city ways earn sniffs of disapproval. As corn shrivels in the heat, and a mysterious murderer stalks the night, dislike turns to suspicion and to mob hysteria. Only the tragic sacrifices of two unlikely heroes save Audrey from lynching and free Fennywolde from a lurking evil. Like its predecessor (The Dark Portal, 2000), this is a terrific page-turner, drenched in foreboding atmosphere and punctuated with grisly discoveries and sinister revelations. If only Jarvis could write memorable characters! The Fennywolders never develop beyond caricatures of vanity, nobility, fanaticism, etc.; even the personalities of Audrey and Akkikuyu seem driven arbitrarily by the demands of the plot. Not that fans will care—not when they can indulge in delicious shudders at the evil spirit Nicodemus's lurid whispering, the abusive Nettle's vicious ravings, and (best of all) the veiled prophetic hints of even darker manifestations to come. Shivery good fun. (Fiction. 10-14)Read full book review > 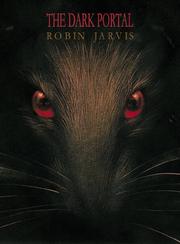 ANIMALS
Released: Aug. 1, 2000
THE DARK PORTAL
by Robin Jarvis
ANIMALS
Released: Aug. 1, 2000
THE DARK PORTAL
by Robin Jarvis
Popular in England but never before published in America, the first book of Jarvis's fantasy trilogy depicts an epic battle between good and evil. The side of good is represented by a society of harmonious, quiet-living mice who are aided and abetted by the more spiritual and mysterious bats above. Together they fight the evil, filthy rats, denizens of the dark and slimy sewers, who are ruled by a demonic overlord named Jupiter. The battle begins when a young mouse named Audrey Brown bravely slips between the bars of the basement grate, the portal between the mouse and rat universe, to search for her father, who has met with misadventure and disappeared into the hellish world beneath. As the stakes rise, Jarvis ratchets up the suspense, neatly juggling several story lines that culminate in a remarkable climactic disclosure. He does a good job, especially through the dialogue, of differentiating the multitude of mice, rat, and bat characters that populate the book. Still, the characters lack that elusive quality of lovability that makes the reader care deeply about their fate. Moreover, although the simultaneously symbolic and literal three-tiered world of bats, mice, and rats is well imagined and beautifully detailed, the narrative is rather dense, causing the book's story engine to flag at several points. Although not right for every reader, Jarvis has delivered a robust book with a big-canvas plot that is tailor made for lovers of fantasy adventure and animal characters. (cast of characters, afterword) (Fiction. 10-14)Read full book review >