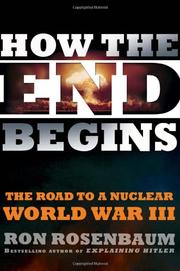 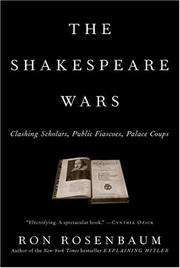 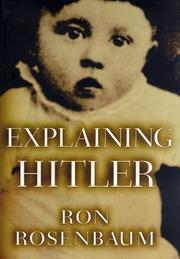 BIOGRAPHY & MEMOIR
Released: July 10, 1998
EXPLAINING HITLER: THE SEARCH FOR THE ORIGINS OF HIS EVIL
by Ron Rosenbaum
BIOGRAPHY & MEMOIR
Released: July 10, 1998
EXPLAINING HITLER: THE SEARCH FOR THE ORIGINS OF HIS EVIL
by Ron Rosenbaum
A resourcefully imaginative examination of our desperate search for an explanation of ultimate evil. In the vast literature on Hitler and the Holocaust, one question recurs again and again: Why? If the "how" (the mechanics and bureaucracy) of the "final solution" has been detailed, then the vexatious "why" still haunts the world's collective conscience. Rosenbaum (Travels with Dr. Death, 1991; Manhattan Passions, 1987), a New York Observer cultural affairs columnist, brings a journalist's vigorous, querying temperament to a topic that all too often drowns in opaque pedantic moralizing. Rosenbaum has read extensively and thoughtfully; he also casts a wide intellectual net, writing chapters on the interpretive musings of H.R. Trevor-Roper, Alan Bullock, Yehuda Bauer, the philosopher Berel Lang, literary critic George Steiner, filmmaker Claude Lanzmann, and even the Hitler apologist and revisionist David Irving. (Conspicuously and curiously absent is Primo Levi, whose work The Drowned and the Saved is a classic in the field.) Potentially explosive subjects—for example, Hitler's reportedly "abnormal" sexuality—are handled with discerning intelligence. Rosenbaum employs a brilliant methodological stratagem by taking Albert Schweitzer's 1906 study, The Quest for the Historical Jesus, as a model. Schweitzer realized that the 19th-century school of German Protestant "higher criticism," which prided itself on its "scientific" positivism in explaining Jesus, actually revealed more about scholars themselves than the historical figure they were studying. Similarly, Rosenbaum shows how the various attempts to "explain" Hitler are prisms that reflect our own fears and desires. This leads, of course, to the not insignificant matter of Rosenbaum's own fears and desires, ironically not fully addressed by the author. Yet his great contribution is that, unlike most Holocaust scholars, he refuses to offer a definitive explanation. Instead, he lays out with memorable clarity a series of tantalizing interpretations, preferring a "poetry of doubt" that allows us to grapple for ourselves with the question of evil. Profound and provocative. (Author tour) Read full book review >

TRAVELS WITH DR. DEATH: AND OTHER UNUSUAL INVESTIG
by
Released: Jan. 8, 1990

TRAVELS WITH DR. DEATH: AND OTHER UNUSUAL INVESTIG
by
Quirky, often bizarre plum pudding of offbeat investigative pieces by a fine writer of personal journalism (Manhattan Passions, 1987). Rosenbaum's title tale tells of his accompanying Dr. James Grigson, a forensic psychiatrist known in the Texas courts as "Dr. Death," on a two-day round of appearances in three murder trials where his testimony gives the jury the right to exercise the death penalty. Grigson is a bouncy, remorseless egoist with gold cigarette holder and gleaming white Cadillac who himself is branded by fellow doctors as a sociopath who kills again and again: "I don't forgive," Grigson says about death-penalty defendants. None of the 15 other pieces is less than gripping, although some become so richly laced with subterranean facts and characters that few will be able to retain much more than an impression of a busy ant-heap. This is especially so when Rosenbaum investigates the wonderful Watergate case with Inspector Richard Nixon in his search for Deep Throat; or seeks Oswald's ghost and fellow snipers in Dallas; or interviews ambiguous General Richard Secord about his false testimony to an Iran-contra special investigator or his past as an arms-dealer for the US. On a lesser level but utterly spellbinding is Rosenbaum's rather moving detective work about the murder of ravishing Mary Meyers, the highborn Washington painter who became JFK's mistress during his final year and kept her secrets in a diary that was confiscated by Ben Bradlee and others when she was shot to death outside her studio; about Manhattan's twin gynecologists whose tandem deaths were twisted into melodrama by the film Dead Ringers; and about the false hopes that support the cancer-cure underground in Tijuana's Hoxey Clinic. A terrific trip through mortality with a winged imp of the perverse. Read full book review >