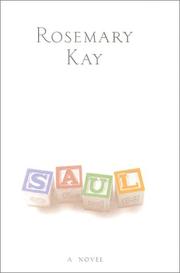 FICTION & LITERATURE
Released: Feb. 1, 2000
SAUL
by Rosemary Kay
FICTION & LITERATURE
Released: Feb. 1, 2000
SAUL
by Rosemary Kay
In Britain, Kay's story of her premature baby's four months of life is being presented as nonfiction. Her American publisher's decision to call it a novel, citing the author's telling of the tale from her infant son's point of view, is a mistake. What works powerfully in the context of genuine grief and self-exploration falters as imaginative fiction. Saul was born at 23 months, weighing one pound, four ounces. Kay is at her best describing the actual physical world of the neonatal intensive-care unit as the infant rocks from one crisis to another. Through Saul's eyes, Kay expresses with concentrated intensity a host of sensations—the noise of the machines, the hands of the nurses, the needles and tubes—as well as the human drama. The parents struggle with hope and despair, anger and exhaustion, while the staff contends with long hours and far from perfect working conditions. Drawn with precision, these adults, some more or less likable, some more or less capable, are all believable and very human. So is Saul as a baby fighting to survive: crying, wiggling, balling his fists. But Kay falters when she attempts to give voice to Saul's soul. It's understandable that a grieving parent might look for solace through the spiritual, viewing her child's ordeal as a fierce contest between, on the one hand, "This Living" and, on the other, a joining up with "Granddaddy" and other departed souls. However genuine in nonfiction, the contrivance is cloying in a novel; and Kay is weakest in her pure fiction, imagining sentimental love scenes between dead relatives whose connection to Saul is forced at best. A serious, two-hankie tearjerker, classy to boot, heartfelt and brave. Still, better as real life than as fiction. Read full book review >