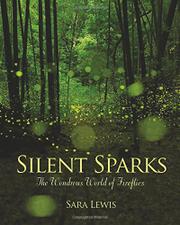 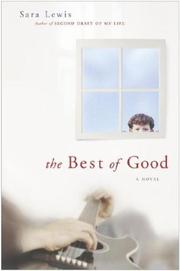 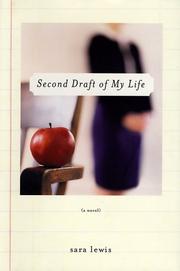 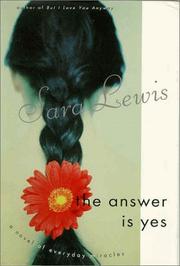 FICTION & LITERATURE
Released: July 1, 1998
THE ANSWER IS YES
by Sara Lewis
FICTION & LITERATURE
Released: July 1, 1998
THE ANSWER IS YES
by Sara Lewis
A wacky novel filled with scarcely believable yet entertaining twists of fate from the author of, most recently, But I Love You Anyway (1996). When she's fired from a dead-end bank job, Jenny Brown prowls her bland suburb, searching for a fulfillment equivalent to that her preoccupied biologist husband Todd finds in studying the genetic properties of brain tumors. Her aimlessness works to her advantage when she wanders into the Institute of Affirmation, where a bevy of oddball classes are offered, including Homecooking for Your Pet, Living Alone and Loving It, and Finishing What You Started. Jenny sits in on an acting class and quickly gets hooked. The Institute's motto, —The Answer is Yes,— becomes the new student's mantra as she makes a series of bold and somewhat improbable moves. Frustrated by Todd's seeming indifference, she choreographs a dramatic exit with her wise adoptive mother—only to discover that Todd never noticed she was gone. Then she agrees to direct a play for her acting class and finds herself welcomed into a community of quasi-misfits who provide the warmth that her marriage lacks. Given Jenny's inexperience, the success of the first play seems just a little too lucky. Casting, costuming, and choreographing roles for more than 30 actors does intimidate her, but her new friends—conveniently, seamstresses and handymen—pitch in to help whenever she's feeling overextended. Preparations, though, come to a grinding halt when the director falls off a ladder and ends up in the hospital, but the accident becomes the set-up for Todd, who rarely takes an interest in his wife, to overhear Michael (director of the Institute) professing love for her. Closing with a series of tidy surprises that test credibility, this is, still, a quirkily gratifying escape for any reader who believes in small miracles. Read full book review > 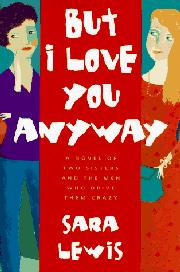 FICTION & LITERATURE
Released: March 1, 1996
BUT I LOVE YOU ANYWAY
by Sara Lewis
FICTION & LITERATURE
Released: March 1, 1996
BUT I LOVE YOU ANYWAY
by Sara Lewis
A deft, engaging novel in the form of a series of vignettes, depicting the trials and joys of extended family life, from the author of Heart Conditions (1994), etc. The narrator, 40-year-old Mimi, a once-divorced, once-widowed mother of two lively, quirky kids—Melanie, 12, and Daniel, 10- -lives on a shoestring in suburban San Diego and is beset by troubles. First, her dippy sister, Eve, marries a suspiciously carefree guy named John, whom she met in a smarmy self-help workshop—an unemployed but oddly cash-rich ex-restaurant manager believed by Mimi to be a thief and a con-man, just as Mimi's and Eve's charming, long-vanished father was. Mimi hates him on sight. Also, the photocopy-and-parcel store that she and Eve run together is being seriously threatened by the opening of a fancy new chain store in a mall just down the freeway. And, finally, Mimi finds herself struggling not to fall in love with Henry, a too-young, too-short, ``nice'' but unemployed guy she meets on a blind date; Mimi's decided never to replace Bill, her second husband who died of cancer. At first, Henry's allure is that his marketing background and ideas promise to help save the store; but Mimi falls for his persistent devotion, even as her own unconventional ideas- -building a drive-through window for the convenience of harried customers with kids; installing a cafe serving Eve's husband's fabulous coffee and cookies—begin to turn a profit. Meantime, money starts disappearing from the till. Who's the thief—John, a part-time employee, or Henry? Though the vignettes are at first somewhat slow-moving and awkward, the story soon enough gains direction and suspense—and ends with convincing lessons satisfyingly learned by all major players. Read full book review > 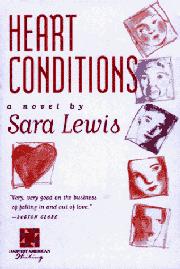 FICTION & LITERATURE
Released: Jan. 1, 1994
HEART CONDITIONS
by Sara Lewis
FICTION & LITERATURE
Released: Jan. 1, 1994
HEART CONDITIONS
by Sara Lewis
A hapless editorial assistant marries her unfaithful boyfriend only to be betrayed again: a whiny New York tale by the author of the story collection Trying to Smile (1992). At 33, Alice Hammond has no great expectations of life, and so far her assumptions have proved correct. Obsessively attached to her mother as a young child, Alice lost both parents to a car accident when she was 13. Shipped off with her older sister, Laura, to live with relatives, Alice suffered resentment and boredom for years until her escape to Barnard and New York. A little over a decade later, Alice is working as a lowly, much put-upon editorial assistant, having spent her inheritance on supporting herself and her actor boyfriend—a boyfriend who now calls from an out-of-town engagement to announce that he's in love with another woman and Alice has six weeks to move out. Is Alice outraged? Certainly not- -she's accustomed to verbal abuse, and morosely submits to more as her sister criticizes her for a lack of assertiveness, her aunt suggests that she cut her hair, and the family at large decides that Alice should move in with her elderly grandmother and act as unpaid caregiver. Alice's role as martyr is assured when she discovers that she's not only been dumped—but she's pregnant. Her grandmother unexpectedly defends Alice's decision to keep the child. Sister Laura apologizes for her slurs, and even Nick, Alice's boyfriend, returns to claim his place as her husband. But it's too little too late—Alice's heart has migrated to Dan, an unassuming co-worker who provided moral support and baby equipment when no one else did. Dumping Nick, rescuing Gram from self- neglect, and setting up house with a new, sympathetic husband, Alice may expect to live happily after all. First-novelist Lewis's urban characters are original and well- drawn, but their incorrigible self-obsession quickly grows depressing and dull. Read full book review > 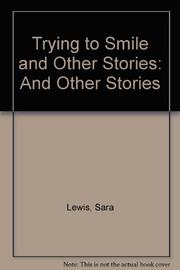 FICTION & LITERATURE
Released: June 1, 1992
TRYING TO SMILE: AND OTHER STORIES
by Sara Lewis
FICTION & LITERATURE
Released: June 1, 1992
TRYING TO SMILE: AND OTHER STORIES
by Sara Lewis
Nine short stories mostly about young women slightly too outrÇ to be yuppies, going through troubled times but keeping stiff upper lips about it. Many of Lewis's offerings first aired in the pages of magazines like Seventeen and Mademoiselle. The best of the lot comes first and is called ``Gone.'' Set around 1970 and bright with the humor/pathos of domestic event, it chronicles the death of an insistently square and rigid father (he voted for Nixon twice) from the point of view of his eldest daughter. At the graveside a colleague of the dear departed reveals his other life: ``We loved a wonderful man,'' she tells the grieving widow, leaving the young narrator far more shattered by her father's rejection than by his death. In other entries, problems exist—like a baby soon to be born in a financially strapped household or an adolescent boy thrown off course by the death of an old friend—but things just fall into place (without much plot tinkering by the author). Still, Lewis hasn't perfected the art of finding a story's end, leaving ``Perfect Combinations,'' concerning the out-of-sync love affair between a struggling actress and rock-music roadie, dangling, with no resolution, either poetic or actual. Lewis's candor and craftsmanship are to her credit—but there's something about the combination of the Spartan prose and quotidian subject matter that underwhelms. Read full book review >