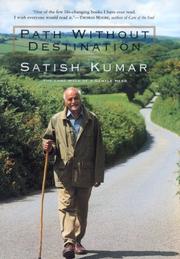 BIOGRAPHY & MEMOIR
Released: Feb. 1, 1999
PATH WITHOUT DESTINATION: AN AUTOBIOGRAPHY
by Satish Kumar
BIOGRAPHY & MEMOIR
Released: Feb. 1, 1999
PATH WITHOUT DESTINATION: AN AUTOBIOGRAPHY
by Satish Kumar
Tales from a rich, cross-cultural life by a renowned Indian peace activist. Kumar's exceptional spiritual journey began at age nine, when he was accepted into training as a Jain monk. He learned Sanskrit, meditation, and extreme discipline (one of the rigors of the order was to have one's hair plucked, not cut, from the head), but as an adolescent he began to question the purpose of the life of solitude and study. He left the monkhood and attended university, became entrenched in the ideology of Gandhi, and entered into an arranged (and passionless) marriage, which ended abruptly as his commitment to itinerant peace activism grew. Kumar began traveling the globe, preaching of the need for nuclear disarmament, worker's unions, and organic farming. Most of these travels he made on foot, walking from village to village through India, Pakistan, the Soviet Union, continental Europe, England (which he reached by train), and finally America (arriving on board the Queen Mary, thanks to a generous sponsor). The latter half of the book is absorbed with a more settled life, as Kumar founded an activist English newspaper called Resurgence, married again and had two more children, and tried his hand at small-scale organic farming in the English countryside. Now in his 60s, Kumar still makes walking pilgrimages, especially around milestone birthdays. In monk's fashion, along the way he has simply trusted in the hospitality of whomever he might meet at his daily destination, and most of the stories testify to the universal kindness of individuals. For a freewheeling wanderer, he fills this autobiography with many niggling details that weigh it down (precisely how the auction prices proceeded for his English farm, exactly which vegetarian dishes were served at people's homes, etc.). Yet this concrete attention to minutiae also prevents the memoir from becoming mired in the many abstract ideals Kumar embraces, and grounds it in refreshing reality. Read full book review >