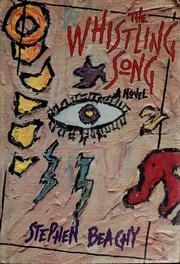 FICTION & LITERATURE
Released: Aug. 26, 1991
THE WHISTLING SONG
by Stephen Beachy
FICTION & LITERATURE
Released: Aug. 26, 1991
THE WHISTLING SONG
by Stephen Beachy
Writing like a possessed angel, first-novelist Beachy dreams up the adventures of a male Alice who encounters a 1980's America every bit as darkly bizarre and hilarious as Lewis Carroll's Victorian wonderland. This nonlinear, picaresque tale sweeps back and forth across the country and backward and forward in time like an erratic metronome. Matt, a working-class kid from Des Moines, narrates the story of how he became an orphan, eventually escaped from an institution with the amoral and beautiful Jimmy and wandered the highways, hitchhiking, sleeping rough, begging, robbing, prostituting himself, faithfully searching for the earth-mother babysitter who caressed him in his Mr. Bubble bath. He also keeps an eye out for the man he believes murdered his parents, whose deaths leave him riddled with guilt because they were foreshadowed by his wish. Beachy is equally good at describing the real (when Matt's father loses his job and the family disintegrates) and the surreal (the fantastic doughnut shop US of Jesus freaks and freeways). His travels bring Matt face to face with a cast of lost souls, depicted with scorn, compassion, and a wild humor. Matt longs for the love of Jimmy, who warns him ``Don't be a fag,'' and ultimately turns out not to be the rebel he seems. This is a demanding book—with a superb payoff. The author plays with the idea that human beings are most conscious of ``being'' when they are in states of joy, boredom or dread. He serves up joy, boredom, and dread, sometimes in a single paragraph, sometimes all mixed together in a single sentence, somehow in all 416 pages. Of the three, joy is somewhat slighted, and the whistling song is whistling in the dark. A hypnotic, unshakable, painfully funny vision of America by a word-drunk writer. Read full book review >