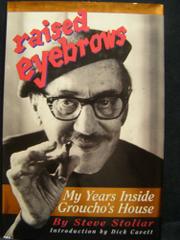 BIOGRAPHY & MEMOIR
Released: March 1, 1996
RAISED EYEBROWS: MY YEARS INSIDE GROUCHO'S HOUSE
by Steve Stoliar
BIOGRAPHY & MEMOIR
Released: March 1, 1996
RAISED EYEBROWS: MY YEARS INSIDE GROUCHO'S HOUSE
by Steve Stoliar
An always devoted, sometimes naive fan attains his fondest wish and gets to work for his hero, Sovereign Wit of the Age, Groucho Marx Himself. Here he presents the quotidian details. Stoliar, now a television writer, joined a foundering household as Groucho's secretary and gofer for the last three years of the failing master's life. When he started, he was 19, Groucho was 83. It was a case of a puerile youth and a sad old pantaloon. Always honored by whatever notice the comic paid him, Stoliar took note of every snappy quip the old man could mutter. While much of it is less than significant, devotees will savor the passing references to the great, nearly forgotten songs and tag lines of the Marx canon. Not surprisingly, the author shares the limelight with Groucho, though lots of others appear from the wings chez Marx. There's son Arthur Marx and George Burns, for example. There's Marvin Hamlisch and Mae West, Nat Perrin and Nunnally Johnson, Ryskind and Perelman. There's Dick Cavett (to whom the author toadies a bit and who, it happens, has supplied the introduction to his text). The most singular character, not excepting Groucho, is the notorious Erin Flemming, the mercurial woman who, it was apparent to all who saw her in action, stole Groucho's very soul. Because it deals with a particular period in the life and death of the famous man, the book is, perforce, a unique addition to the Marxist athenaeum. Still, it is two parts a below-stairs, I-was-there, tell-all gossip piece and one part Sunset Boulevard, with Groucho Marx in the Swanson role. The net effect is simply melancholy. If Groucho had had the chance to read this, he'd have surely fired off a nasty, nifty letter, probably on the letterhead of Flywheel, Shyster and Flywheel. (b&w photos, not seen) Read full book review >