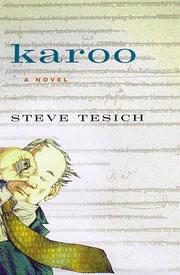 FICTION & LITERATURE
Released: March 1, 1998
KAROO
by Steve Tesich
FICTION & LITERATURE
Released: March 1, 1998
KAROO
by Steve Tesich
Original, hugely ambitious, seriocomic deathsong by the late Tesich (Summer Crossing, 1982), a screenwriting Oscar-winner for Breaking Away (1979). Tesich died in 1996, at age 53, having completed this epic about overweight, wealthy, 50-year-old Hollywood script doctor Saul ``Doc'' Karoo, a talentless, chain-smoking alcoholic hack separated from his wife Dianah and fatally flawed with several emotional diseases. Indeed, every gargantuan character flaw known to man fits snugly into Karoo's package of masks. Pointlessly, he keeps an expensive office to go to daily as he fiddles with ``doctor's block''he's redoctoring a script that he doctored three years earlier and that has now gone through many other doctors and doctorings. Meanwhile, he can't face his adopted son, Billy, a Harvard freshman, but must face supremely well-cultivated gargoyle Jay Cromwell, a producer of supermegahits who chews film doctors for breakfast. Karoo tirelessly avoids self-understanding, fearing the glare of any major insight into himself. After all, if he allowed himself to consider his life, he might pluck out his eyes in disgust. As is, he loses more and more of himself until there's nothing left but an insomniac creature living out his ``storyline.'' Among other events, Cromwell has Karoo recut and thus knowingly ruin a masterpiece by a Welles-like directorial giant. As it happens, Billy's birth mother, Leila Millar, a waitress, has a small role in the film, and Karoo recognizes and befriends her. They begin an affair. But son Billy, not knowing the older starlet is his mother, also falls for her and she for him. The triangle ends in an auto accident, with Karoo driving, in which Billy and Leila are killedand the recut small film, prominently featuring Leila, becomes the year's big smash. In an added irony, Cromwell decides to film a Hollywoodized version of the Karoo, Billy, Leila triangle as written by a dirt-digging Pulitzer-winning reporter. It's a far, far-out and haunting ending to cap a powerful and deeply disturbing portrait of a flawed, self-destructive, and compulsively fascinating figure. Read full book review >