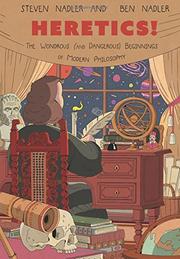 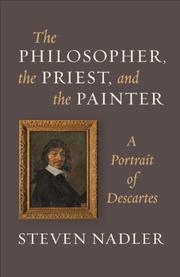 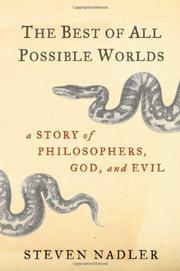 THE BEST OF ALL POSSIBLE WORLDS: A STORY OF PHILOSOPHERS, GOD, AND EVIL
by Steven Nadler
BIOGRAPHY & MEMOIR
Released: Nov. 6, 2008

THE BEST OF ALL POSSIBLE WORLDS: A STORY OF PHILOSOPHERS, GOD, AND EVIL
by Steven Nadler
"An exemplary entry in the history of ideas."
Nadler (Philosophy/Univ. of Wisconsin; Rembrandt's Jews, 2003, etc.) recounts a major episode in the history of early modern philosophy. Read full book review > 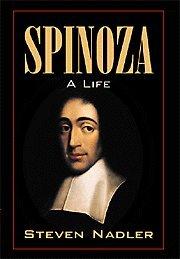 BIOGRAPHY & MEMOIR
Released: April 1, 1999
SPINOZA: A LIFE
by Steven Nadler
BIOGRAPHY & MEMOIR
Released: April 1, 1999
SPINOZA: A LIFE
by Steven Nadler
With eloquent sobriety and restraint, this biography of the Dutch-Jewish thinker whom Bertrand Russell called "the most lovable of the philosophers" communicates much of its subject's rarefied spirit. Though many tomes have been written on Spinoza's thought, little has been published on his life, because, as Nadler (Philosophy/Univ. of Wisconsin, Madison) observes, most of his revealing personal letters were destroyed after his death. Accordingly, apart from sections on the long-known facts of Spinoza's existence, especially the Amsterdam Jewish community's infamous excommunication of him in1656, much of this biography's mood is appropriately subjunctive: Spinoza may have known his contemporary Rembrandt; must have been amused by the Jewish fervor over the messianic pretender of his day, Shabbetai Zvi; and probably did not represent the Dutch government to the French, as has sometimes been claimed, during the Franco-Dutch war of the 1670s. Two facts convincingly deduced by Nadler about Spinoza are that he never studied for the rabbinate and that some of Amsterdam's Jews continued to associate with him even after his excommunication. But, like 17th-century Netherlandish paintings, the strength of this study is its contextual details, as in the several pages devoted to discussing the Dutch craze for speculative investment in tulip bulbs imported from Turkey (the famously Dutch flower was not native to Holland) and its likely impact on the Spinoza family's fortunes. The faint outlines of Spinoza's life take on a brighter color against the backdrop of Nadler's rich evocations of the tensions between Amsterdam's Ashkenazic and Sephardic Jews, Calvinist and Remonstrant Christians, and Orangist and De Wittian statesmen. The stories of Spinoza's friendships with other intellectual luminaries of the day, such as Leibniz, Christiaan Huygens, and Robert Boyle, are retold in the context of this lively social and political history. Spinoza, so often sainted or demonized, at last receives a fine, measured biography. (11 photos, unseen) Read full book review >