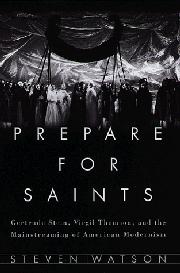 BIOGRAPHY & MEMOIR
Released: Feb. 1, 1999
PREPARE FOR SAINTS: GERTRUDE STEIN, VIRGIL THOMSON, AND THE MAINSTREAMING OF AMERICAN MODERNISM
by Steven Watson
BIOGRAPHY & MEMOIR
Released: Feb. 1, 1999
PREPARE FOR SAINTS: GERTRUDE STEIN, VIRGIL THOMSON, AND THE MAINSTREAMING OF AMERICAN MODERNISM
by Steven Watson
A somewhat lite but always engaging account of the modernist movement's development in America, as seen through the prism of a great American opera. Modernism first arrived in the US via the highly influential and controversial Armory show of 1913, but didn—t gain mainstream appeal until the late 1920s and early 1930s—when it was picked up and promoted by a group of young Harvard graduates who styled themselves "The Friends" or "The Family." Including the architect Philip Johnson, museum curator Chick Austin, and balletomane Lincoln Kirstein, "The Family" consisted of a brotherhood of wealthy, well-connected, largely homosexual boy geniuses whose support and patronage of fellow alum Virgil Thomson led to the 1933 staging of his opera Four Saints in Three Acts on Broadway. Watson (The Birth of the Beat Generation, 1995, etc.) argues that Four Saints helped to foster mass American acceptance of modernist modalities. Certainly, the opera brought together a glittering assemblage of collaborators. Gertrude Stein wrote the lyrics, Frederick Ashton choreographed, John Houseman directed, and Florine Stettheimer created the set and costumes. Watson provides brief biographies of all concerned. But he focuses on the tumultuous relationship of Stein and Thomson. She was 22 years older, prickly, less famous than she wished to be, while Thomson was a promising unknown. Even with his powerful allies, it took nearly six years to get the opera produced. The ruptures and reconciliations with Stein made things even more difficult. The opera is rarely revived today, but the beauty of its staging, the novelty of its all-black cast, and its general newness made it a landmark when it opened. Despite the opera's success and its influence, Thomson and Stein only collaborated once more (on the lesser-known The Mother of Us All). The occasional shallows of his wide-ranging account are surpassed by the depth of Watson's presentation of a pivotal cultural moment. (100 b&w photos, not seen) Read full book review > 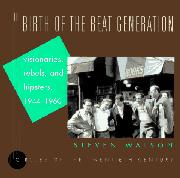 HISTORY
Released: Nov. 27, 1995
THE BIRTH OF THE BEAT GENERATION: VISIONARIES, REBELS, AND HIPSTERS, 1944-1960
by Steven Watson
HISTORY
Released: Nov. 27, 1995
THE BIRTH OF THE BEAT GENERATION: VISIONARIES, REBELS, AND HIPSTERS, 1944-1960
by Steven Watson
A highly entertaining group biography of Kerouac, Ginsberg, Burroughs, and company that skimps on literary criticism but plumbs the Beats' dramatic lives with not-quite-prurient gusto. Anyone interested in the Beat writers will probably have encountered nearly all of the information here before; Kerouac alone seems to have inspired as many biographies as Abraham Lincoln. But by giving equal time to the three central Beats, Watson (The Harlem Renaissance, not reviewed, etc.) astutely emphasizes the interplay between their separate inspirations and the importance they attached to several ancillary figures, especially Columbia student and murderer Lucien Carr, unschooled car thief Neal Cassady, and Benzedrine addict Joan Vollmer, who married the primarily homosexual Burroughs. Kerouac's fictional portrayal of Cassady in On the Road helped to create a popular image of ``beatniks'' (in columnist Herb Caen's flip 1957 coinage) as foolish, speed-crazed menaces to the American way, but Watson shows that the Beats were bonded by enormous intellectual curiosity as well as the voracious pursuit of sex, drugs, and mystical visions. Of course, the towering disarray of Beat lives drives this rollicking saga more than the inherent qualities of Beat literature. Burroughs's heroin addiction, his South American quests for the legendary hallucinogen yage, and the botched William Tell stunt that killed his wife; Kerouac's speed-fueled writing binges and later alcoholic descent; Cassady's underworld upbringing, incessant marital infidelities, and last hurrah as the acid- dropping driver for Ken Kesey's Merry Pranksters; Ginsberg's incarceration in a mental hospital and his sexual exploits with Burroughs, Kerouac, and, most sustainedly, Cassady: The brow- lifting anecdotes maintain their perverse allure. On a more critically rigorous note, Watson provides an expert map to the links between the Beats and the poets of the '50s San Francisco Renaissance. For a spirited introduction to the midcentury American literary avant-garde, curious readers could do far worse than to start here. (photos, not seen) (Author tour) Read full book review >