Sue Henry's first Jessie Arnold mystery, Murder on the Iditarod Trail, won both the Anthony and Macavity Awards for Best First Novel. She also writes the Maxie McNabb mysteries. Henry is a former college administrator and has lived in Alaska for 30 years. 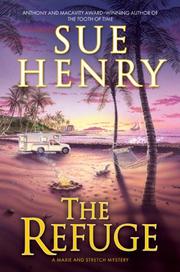 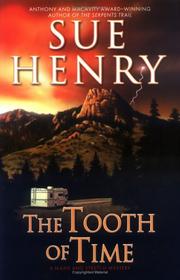 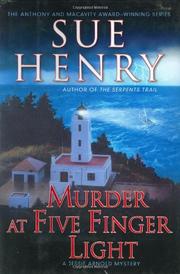 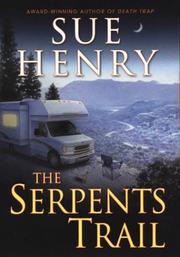 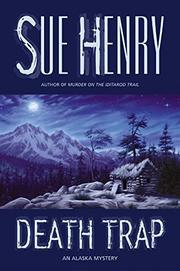 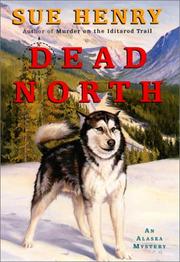 MYSTERY THRILLER
Released: July 2, 2001
DEAD NORTH
by Sue Henry
MYSTERY THRILLER
Released: July 2, 2001
DEAD NORTH
by Sue Henry
"A stock travelogue interrupted by stock peril. There's not much doubt about the villain either, although voluble Maxie makes a nice change from Jessie's more taciturn friends back home."
Jessie Arnold's been living in a tent since her last house burned down (Beneath the Ashes, 2000, etc.), so it seems like a welcome change when she's asked to drive a brand-new motor-home from Coeur d'Alene, Idaho, up the spectacular Alaska Highway while she waits for construction to begin on her new place. But Jessie won't be enjoying a scenic idyll for long. A few days into the journey, her lunch is stolen by a young man she finds cowering under her RV—a cold, hungry teenager named Patrick Cutler. Her road friend, Maxie, a senior citizen with a dachshund who has taken a shine to her husky Tank, shelters the boy for the night. Before Jessie and Maxie have a chance to question Patrick further, though, he disappears, along with Maxie's larder. Patrick is headed to Fairbanks, on the run from Cody, Wyoming, where his mother was beaten to death. His brutal cop stepfather, McMurdock, claimed Patrick killed her with a baseball bat before he checked out of Cody too. Detective Loomis, McMurdock's colleague, is investigating. When another Cody teenager is thrown off a bridge, Loomis joins the Royal Canadian Mounties in pursuit of Patrick and McMurdock, setting the stage for Jessie and Maxie to encounter Patrick once more—and for a chase up the Alaska Highway, with lumbering motor-homes and big rigs providing NASCAR-like thrills. Read full book review > 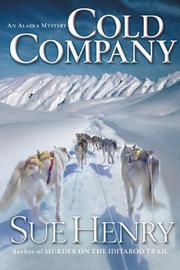 MYSTERY THRILLER
Released: June 1, 2001
COLD COMPANY
by Sue Henry
MYSTERY THRILLER
Released: June 1, 2001
COLD COMPANY
by Sue Henry
"Henry delivers the usual suspense and an unusually high body count in this stolid, not very mysterious, outing."
Jessie Arnold, Alaskan musher and frequent target of sick serial killers (Dead North, 2001, etc.), is looking forward to helping the construction crew that's building her new log cabin. Gloating over the freshly dug hole for the basement, however, she sees something distinctly unconstructive in the dirt: a dead body. It's the corpse of an old man, perhaps James O'Dell, the former owner of her property and the uncle of the man who sold it to Jessie. Though he seems to have died of natural causes, Jessie can't help wonder why he's buried in an unmarked grave on his own land. As if old flesh and a new cabin weren't enough to keep Jessie busy, a recently murdered young woman, apparently the victim of a murderer imitating real-life serial killer Robert Hansen, turns up nearby. When the sister of one of Hansen's victims shows up at Jessie's place, hoping to find her long-lost sister, her quest strikes close to home for Jessie. She investigates, leaving general contractor Vic Prentice and his crew—taciturn Dell, flirtatious J.B., and energetic Stevie, along with Jessie's friend Hank Peterson—to do most of the work themselves. Meantime, someone starts leaving Jessie single red roses. It's not the kind of thing she'd expect from her old boyfriend, nor from her new love interest, musher Lynn Ehlers. Deadly pursuits over and under a glacier finally disclose the culprit. Read full book review > 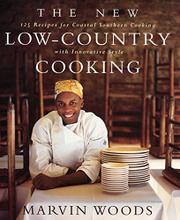 MYSTERY THRILLER
Released: July 1, 2000
BENEATH THE ASHES
by Sue Henry
MYSTERY THRILLER
Released: July 1, 2000
BENEATH THE ASHES
by Sue Henry
"One wonders what Jessie did to deserve this melodramatic trial by fire, in which everyone but her dogs gets burned. It does leave Jessie ready, however, to rebuild her cabin—ready, perhaps, for adventures that are a little less over the top."
The morning after the pub burns down and a local drunk is killed, Alaskan musher Jessie Arnold (Murder on the Yukon Quest, 1999, etc.) gets a call from Anne Holman, whom Jessie knew ten years ago, asking for help and a place to stay. When Jessie picks her up, she realizes that Anne has undergone some ugly changes. Even before arson investigator Mike Tatum identifies Anne as a suspect in another fire that killed two boys, Jessie knows Anne is hiding something. But is Anne lying because she's a victim of her husband's sadistic abuse or because she's a pathological murderer? When Tatum's overbearing obsession with her houseguest provokes Jessie, despite her misgivings, into helping Anne on a mysterious errand, they find a ten-year-old corpse, and Jessie hopes the worst is over. The night they return, however, a fire levels Jessie's cabin, and Anne disappears in the uproar. A few nights later, Jessie is drugged, abducted, then returned to her bed. Another fire, another death, and then Tatum is found dead, shot with Jessie's gun. Now a suspect herself, Jessie marches off to confront the arsonist. The showdown, involving yet another fire, snowmobiles riding to the rescue, twisted marital devotion, and self-immolation, does little to clear up all the death and destruction that preceded it. Read full book review > 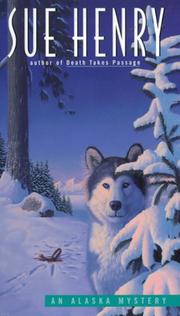 MYSTERY THRILLER
Released: Aug. 1, 1998
DEADFALL
by Sue Henry
MYSTERY THRILLER
Released: Aug. 1, 1998
DEADFALL
by Sue Henry
"Happy Birthday Jessie" reads the tag attached to the bear trap that breeder/musher Jessie Arnold's sled-dog Nicky has stepped into. The sadistic prank has obviously been planned in advance, and as further harassment'silent phone calls, another bear trap, a longer and more threatening note—makes clear, the perp obviously isn't going away. So Jessie, after a mountain drive on doctored brakes sends her truck off the road, decides to take herself away instead, by hiding out on Kachemak Bay's deserted Niqa Island while her frustrated suitor, State Trooper Alex Jensen (Death Takes Passage, 1997, etc.) starts tracking her tormentor. As Jessie hunkers down with only her lead dog Tank for company, Alex and his buddy Ben Caswell make the rounds of possible suspects: the anonymous writer who complained to the Iditarod committee about Jessie's entrance in the race, the bad guys who've vowed revenge on Alex when he put them away, the bad guys' bad friends. With every step that takes them closer to Jessie's stalker, though, they're falling further behind, since the stalker's already traced Jessie to Niqa Island and turned her wildly beautiful retreat into an inescapable trap. Stolid detective work alternates with a woman in peril against a spectacular, dangerous backdrop. The result is surefire suspense—and the tightest, most compelling of Henry's five Alaska novels to date. Read full book review > 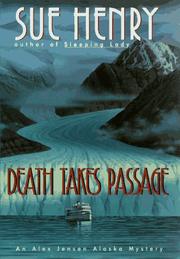 MYSTERY THRILLER
Released: Aug. 1, 1997
DEATH TAKES PASSAGE
by Sue Henry
MYSTERY THRILLER
Released: Aug. 1, 1997
DEATH TAKES PASSAGE
by Sue Henry
Alaska State Trooper Alex Jensen returns to the past in even more ways than the one suggested by the retro title (cf. Death on the Nile, etc., etc.) when he's assigned to the Spirit of '98's Inside Passage cruise commemorating the centennial of the Alaskan Gold Rush. There'll be tours of historic local sites, period theatricals hearkening back to the 1890s, and, just for good measure, the ceremonial transporting of a ton of gold in bars, flakes, and dust. Naturally, all that gold draws the attention of a mysterious shipboard menace who pilfers golden goodies from selected passengers' staterooms, tosses suspiciously reticent Spirit staffer Julie Morrison overboard, and aims, with the help of some outside muscle, to catch the ship napping while it's isolated from radio contact in the Grenville Channel. How serious are these guys? A couple of minor-league confederates have already stolen a sailboat and dispatched the luckless owner (the discovery of the floating corpse by the Spirit crew is only the most convenient of several whopping coincidences), and the ringleaders intend to blow up the Spirit as soon as they've off- loaded the swag. Despite a boatload of nondescript suspects who remain as remote as the majestic natural backdrops, Henry (Sleeping Lady, 1996, etc.) keeps the intrigue swirling and the tension mounting with a program of threats, mysteries, and great scenery as varied as anything in a tour director's bag of tricks, in what may be her best outing yet. (First printing of 25,000; author tour) Read full book review >

MYSTERY THRILLER
Released: Sept. 1, 1996
SLEEPING LADY
by Sue Henry
MYSTERY THRILLER
Released: Sept. 1, 1996
SLEEPING LADY
by Sue Henry
Alaskan charter pilot Norm Lewis has been missing for months when the spring thaw reveals the ruins of his missing plane. But the corpse inside, beaten to death even before the final bullet, isn't Norm's: It's the body of a woman, a federal agent who vanished during a sting operation against poachers in the Arctic National Wildlife Refuge. Rochelle Lewis, convinced that her husband must have tried to walk from the plane to the nearest settlement 30 miles away, flies out to follow in his footsteps- -and she does, in more ways than one. Luckily, featureless State Trooper Alex Jensen (Termination Dust, 1995, etc.) is on hand to rescue Rochelle from the transparent bad guys and pull together the scant loose ends. More frigid adventure than mystery, though the Alaskan snapshots may satisfy less demanding fans of John Straley and Dana Stabenow. Read full book review > 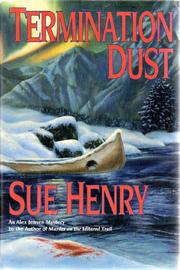 MYSTERY THRILLER
Released: May 1, 1995
TERMINATION DUST
by Sue Henry
MYSTERY THRILLER
Released: May 1, 1995
TERMINATION DUST
by Sue Henry
A second outing for homicide detective Alex Jensen of Alaska's State Troopers (Murder on the Iditarod Trail, 1991), who's now in Canada's Yukon Territory helping RCMP Inspector Del Delafosse with a cross-border case of robbery and murder. Working out of Dawson City, the two follow the trail of an empty boat on the Yukon River to the campsite of Jim Hampton—a Denver construction worker on a canoeing vacation who's found the bones and 1897 journal of Addison Riser, one of the Gold Rush victims of that terrible winter and of murderous partners as well. Hampton himself was nearly killed the day before by a marauding pair of roughnecks in a boat who shot at him and stolen his gear. When Jensen and Delafosse arrive at his camp, they find Hampton dazed, drenched in liquor, his gear neatly restored, with the murdered body of Warren Russell—former state senator and sport fisherman—nearby. That's just for starters in an overstuffed saga that goes on to another killing, a hair-raising mountain truck-ride, Jensen's jealousy-touched romance with dogsled champ Jessie, and an industriously colorful cast of loners and renegades—all interspersed with pages from Riser's journal, history mini-lectures, paeans to the beauty of the frozen North, and enough camp lore to fill a survival handbook. This second in the series has its moments but winds up a pretty indigestible stew. Meanwhile, Murder on the Iditarod Trail is slated to be a CBS-TV movie this year. Read full book review > 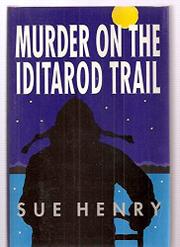