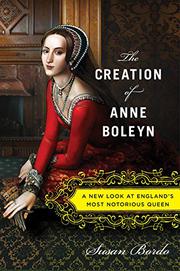 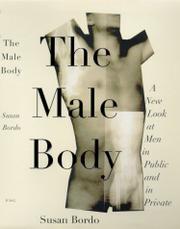 NON-FICTION
Released: May 1, 1999
THE MALE BODY: A NEW LOOK AT MEN IN PUBLIC AND IN PRIVATE
by Susan Bordo
NON-FICTION
Released: May 1, 1999
THE MALE BODY: A NEW LOOK AT MEN IN PUBLIC AND IN PRIVATE
by Susan Bordo
A cheerful but probing look at the male form, seeking to prove that similar myths, fantasies, and pressures have been applied to men's and women's bodies, with some surprising parallel effects on the male and female mind. Bordo (English and Women's Studies/Univ. of Kentucky) begins her airing of the male body with her father's penis. That is, the fact that she could not imagine it leads the author to conclude that society has never bombarded us with male bodies in film, literature, magazines, and advertisements as it has done with the female form. In the vein of Roland Barthes, Bordo plows through some of the more disturbing and graphic myths of the phallus in modern times, using Philip Roth, Jockey ads, romance novels, and Seinfeld (among others) to infuse humor into such subjects as the pressure to "perform," the stereotyped Åbermensch of hardened body and heart, and gender roles in the home. A recurring question is whether men and women react differently to images of the opposite sex, and Bardo answers with a resounding no. Gay culture and African-American culture, the author argues, have contributed greatly to the reintroduction of beauty to the male body, as their attitudes about public display and preening fashion have altered the mainstream American conception of masculinity. The modern man is bewildered by women's conflicting ideas as to what this male essence should be, the serene and sensitive "nice guy" or the aggressive beast and sexual machine that the mass media reifies as the only unadulterated man. The author occasionally moves too far afield, dedicating entire chapters to the Lewinsky affair and Lolita, but these too are written with style, humor, and insight. Bordo may get personal but is never too serious, and her work underlines some surprising commonalities and differences between the sexes without a whiff of demagoguery. Read full book review > 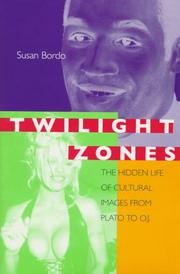 NON-FICTION
Released: Sept. 1, 1997
TWILIGHT ZONES: THE HIDDEN LIFE OF CULTURAL IMAGES FROM PLATO TO O.J.
by Susan Bordo
NON-FICTION
Released: Sept. 1, 1997
TWILIGHT ZONES: THE HIDDEN LIFE OF CULTURAL IMAGES FROM PLATO TO O.J.
by Susan Bordo
An attentive critique of both mass-media and philosophical ideologies gets trapped somewhere between the personal and the theoretical. Bordo intermittently lives up to her claim to limn a ``hidden'' life of images—as when she pursues the underlying meanings attached to slenderness in the recent wave of ultra-skinny models, or in her analyses of the representation of sexual harassment and of the continuing sub rosa ghettoization of feminism within ``advanced'' postmodern scholarship. Often, though, as when Bordo (Philosophy/Univ. of Kentucky; Unbearable Weight: Feminism, Western Culture, and the Body, 1993) turns to cosmetic surgery or the O.J. Simpson case, she is content with more obvious interpretations, wordily entangled in a suffocating self-narration. The cultural landscape Bordo paints consists largely of the world of produced images in the background and her own reactions in the foreground, and although she pays lip service to the intervening complexity of actual lives and social forces, it has no substantial presence in the book. Thus, a ubiquitous advertising campaign like ``Just Do It'' can be simply read as an encompassing ``ideology'' embraced by contemporary society—exaggerating its real importance and thereby, perhaps, that of criticism like her own. It becomes positively depressing to realize that it's likely, judging by an excruciating essay on the role of theory in her work, that she is in fact among the academic cultural critics who are relatively dedicated to the connection of their work to the real world. A final chapter expanding on the personal references that inflect the whole book's tone, a collective memoir by Bordo and her sisters, is strangled at birth by the mandated topics of ``bodies, place and space.'' As ripe for scrutiny as the avalanche of images around us is, it seems that the prolific academic cultural-studies industry is capable of blowing up nearly as much snow as it clears away. (31 b&w photos, not seen) Read full book review > 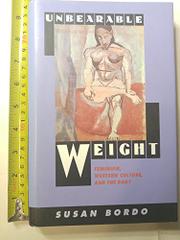 HISTORY
Released: Sept. 1, 1993
UNBEARABLE WEIGHT: FEMINISM, WESTERN CULTURE, AND THE BODY
by Susan Bordo
HISTORY
Released: Sept. 1, 1993
UNBEARABLE WEIGHT: FEMINISM, WESTERN CULTURE, AND THE BODY
by Susan Bordo
In dense, challenging, subtly argued philosophical essays, Bordo (Philosophy/LeMoyne College; The Flight to Objectivity, 1987- -not reviewed) offers a postmodern, poststructuralist feminist interpretation of the female body as a cultural construction in Western society, emphasizing eating disorders, reproductive issues, and the philosophical background. Many of the problems and ideas of contemporary Western society, says Bordo, derive from the ineluctable mind/body dualism of Plato, restated by Descartes. From the viewpoint of feminist theory (of which the author offers a useful history and critique), women have been identified with the body, which itself has been characterized as an alien, instinctual, threatening, passive, and false self in which the true self—the active and manly mind/soul- -is confined. In occasionally repetitive pieces—some a decade old, some revised from lectures—carrying titles like ``Are Mothers Persons?,'' ``Reading the Slender Body,'' and ``Material Girl,'' Bordo demonstrates how this identification is deployed in law, medicine, literature, art, popular culture, and, especially, advertising, which she perceptively decodes by showing how the most trivial detail (men eating hearty meals, women consuming bite-size candies) reveal cultural values and even pathologies. Following Foucault's archaeological technique, Bordo shows how the female body has migrated from nature to culture, where it can be controlled through dieting and altered through surgery—and where women are perpetually at war with it. A cerebral introduction to liberal feminist thinking that's humanized by the author's anecdotes of her own experience as a female body (e.g., confessing to the delights of making stuffed cabbage) and that demonstrates what it advocates: ``What the body does is immaterial, so long as the imagination is free.'' (Fifty- five b&w illustrations) Read full book review >