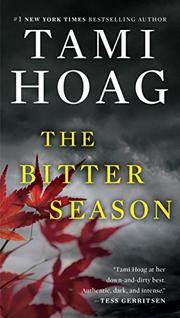 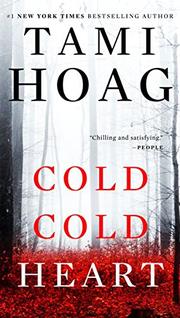 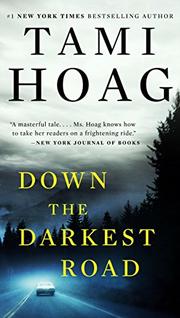 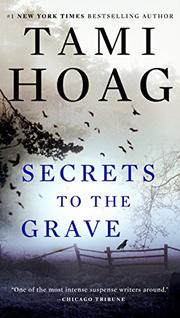 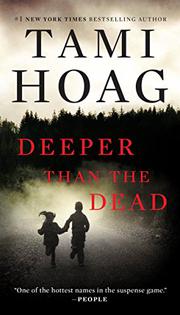 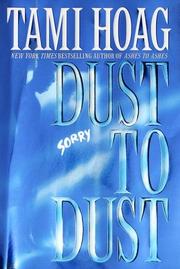 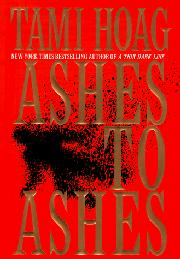 MYSTERY THRILLER
Released: March 9, 1999
ASHES TO ASHES
by Tami Hoag
MYSTERY THRILLER
Released: March 9, 1999
ASHES TO ASHES
by Tami Hoag
Hoag continues to exploit the theme of mutilated women (A Thin Dark Line, 1997, etc.) in a romance thriller about the hunt for a serial killer. Someone in Minneapolis is tying down women, then raping, torturing, and killing them. While they're still alive, the attacker sticks knives into the soles of their feet, then cuts off their nipples and aureoles. After they die, he stabs them in a ritual pattern, slices off their tattoos, and burns their bodies beyond recognition; to relive his moments of triumph, he audiotapes their screams for mercy and death. He's the "Cremator": just another "sadistic sexual serial killer" with low self-esteem and an abused childhood behind him. His first two victims are prostitutes, but when he turns his hand to Jillian Bondurant, the daughter of a billionaire, Minnesota calls in FBI agent John Quinn, world-famous expert on serial killers and related ilk. In the Twin Cities, Quinn is reunited with his ex-lover Kate Conlan, a former FBI expert in violent crime and the only woman he could ever really love. After the death of her daughter and a bitter divorce, Kate has moved to Minnesota and become a victim- and witness- advocate. In that capacity, she's assigned to watch over Angie DiMarco, a runaway teenager who spied the Cremator while she was turning a trick in the park. As lots of tawdry details are dug up about Jillian (incest, etc.), the killer tortures and murders another woman, kills a small dog (in romance, always a sign of irredeemable evil), then begins to plot against Kate herself. Hoag's strong dose of S&M resolves in fire, blood, stabbings, and Kate spread-eagled on a table. Though Hoag grows more and more adept at juggling a complex plot, her sort of violent entertainment isn—t for everyone. Read full book review > 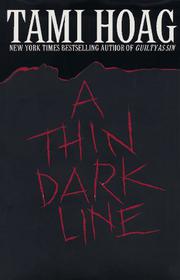 FICTION & LITERATURE
Released: April 1, 1997
A THIN DARK LINE
by Tami Hoag
FICTION & LITERATURE
Released: April 1, 1997
A THIN DARK LINE
by Tami Hoag
Hoag finishes her crossover from sexy soft-cover romance to psychosexual thriller with this tale of tough Cajun loners looking for love in unlikely places. Heroine Annie Broussard is a deputy with the sheriff's office in Partout Parish in southern Louisiana. An orphan who's working hard to make detective, she's also devoted to getting rid of the sexual predators who victimize women. But just as her career seems to be looking up, Annie breaks an unwritten police law: She arrests a fellow officer, Nick Fourcade, when she finds him beating up a murder suspect. Annie should have let Fourcade kill him, say both her colleagues and the bayou parish citizens. After all, the suspect, Marcus Renard, had supposedly stalked Pam Bichon, a single mother. He'd driven stakes through her hands, raped her, killed her, eviscerated her, then left her wearing only a feathered Mardi Gras mask in a deserted cottage on Pony Bayou. Why not kill him? Switching his obsession from Pam to Annie, he maintains that he's innocent and begs Annie to help him. Working with Fourcade, who's suspended but still obsessed with the case, she seeks evidence to put the troubled Marcus legally behind bars. Meanwhile, someone's raping Louisiana women, and Marcus is too injured to be the perp. Is it Annie's lazy, mean-spirited colleague Stokes? Or Pam's husband, involved with a New Orleans racketeer from Fourcade's past? As Mardi Gras approaches, Annie, a cute kid who does 50 chin-ups a day and has an addiction to candy bars, wrestles with Fourcade's dangerous sexuality—fortunately a losing battle—and with the evil presence of deranged male predators that haunts so many recent suspense novels. Hoag (Guilty as Sin, 1996, etc.) is always a good gritty read, but this time a lack of sustained emotional tension makes the novel a long ride on soft tires. Read full book review >

FICTION & LITERATURE
Released: March 1, 1996
GUILTY AS SIN
by Tami Hoag
FICTION & LITERATURE
Released: March 1, 1996
GUILTY AS SIN
by Tami Hoag
No more meeting-cute for romancer Hoag. Here, couples bond over body bags as the author turns her deft hand to a grisly crime thriller, skillfully constructed if less than completely page- turning. In Night Sins (1995), the first of Hoag's two-part combo, hard-nosed agent Megan O'Malley came to rural Deer Lake, Minnesota, fell in love with hard-nosed police chief Mitch Holt, and together with him tracked down Garrett Wright, the evil genius who kidnapped eight-year-old Josh Kirkwood and then beat up Megan, breaking nearly every bone in her hand—at least twice. This time, hard-nosed prosecutor Ellen North, who left the Twin Cities to get away from big-city violence, wants to rescue Josh and prosecute Wright to the full extent of the law. Complicating her case, though, is, first, handsome southerner Jay Butler Brooks, a millionaire author of true-crime novels whose face has been on the cover of People and whose sexy, smoky drawl insinuates itself under Ellen's tough exterior. (Brooks himself has come to Deer Lake to escape his own personal devils and to cash in on a great story, but he'll stay to be redeemed by Ellen's courage and dedication.) The second complication is young Josh himself, who's returned but is too traumatized to testify. Third is Wright's greasy big-time defense attorney, Tony Costello, who used to be Ellen's lover before he betrayed her. Fourth, no one believes that mild-mannered Professor Wright, an acknowledged community good-guy, could have done such a terrible thing. And, finally, someone keeps littering the icy Minnesota landscape with other bodies, including one of another kidnapped boy. After a lot of gut-wrenching dedication by Ellen, Jay, Megan, and Mitch, there's a bloody if positive resolution and both couples limp off into the sunset. This time out, Hoag abandons some of her outrageous romantic style to investigate more serious moral issues. Worthy, but much less fun. Read full book review > 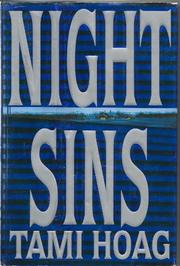 MYSTERY THRILLER
Released: Feb. 15, 1995
NIGHT SINS
by Tami Hoag
MYSTERY THRILLER
Released: Feb. 15, 1995
NIGHT SINS
by Tami Hoag
In Hoag's swell, sexy thriller (after Lucky's Lady, 1992), an eight-year-old boy is kidnapped, and two emotionally battered cops find love. There's a cold snap in Deer Lake, Minn., but it's all hot sparks when Agent Megan O'Malley meets police chief Mitch Holt. She's struggled to become the first female field agent for the Minnesota Bureau of Criminal Apprehension; he has "Harrison Ford's looks and an athlete's body" (sorry, Harrison). On the outside they're two tough cookies who've been scarred by life. But inside, their hearts are as mushy as marshmallows that have burned too long in the fire. When Josh Kirkwood is kidnapped after hockey practice, Megan and Mitch launch a search as the wind chill sends the temperature plummeting to 60 below. The kidnapper, who sends cryptic messages with pieces of Josh's clothing, is an evil maniac who likes to manipulate his victims. Josh's mother, Hannah, suffers most. A doctor who runs a hospital ER and still bakes her own cookies, she blames herself for neglecting Josh; her husband blames her too, even though he was committing adultery with a neighbor when Josh called him for help. Hannah turns to Father Tom, a hip cleric who plays a GameBoy, wears cowboy boots, and feels a little unpriestly about his parishioner. Hoag inserts strong doses of violence (a suspect slits his wrists with pieces of his own glass eye; the villain breaks Megan's hand), skillfully handles a complicated plot, and makes us care about her central characters. The whodunit is compelling, but never more important than the evolution of relationships. Sliding unashamedly from police procedural to purple prose, Hoag savvily steeps her novel in the conventions of steamy romance, where the color of the police chief's "whiskey" eyes are as important as the clues. Read full book review > 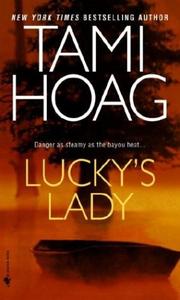 FICTION & LITERATURE
Released: Feb. 1, 1992
LUCKY'S LADY
by Tami Hoag
FICTION & LITERATURE
Released: Feb. 1, 1992
LUCKY'S LADY
by Tami Hoag
Second hardcover romance (Magic, 1990—not reviewed) from veteran author Hoag—a steamy, modern romance set in the Louisiana bayou country. When Serena Sheridan leaves her psychotherapy practice in Charleston and returns home for a vacation, she finds that her twin sister is planning to sell the family estate to an oil company as a way of financing her husband's political career and that her grandfather has retreated into the swamp in protest. Serena hires Lucky Doucet—a devastatingly handsome Cajun (she thinks of him as "a devil on steroids")—to help her find the old man. Though at first put off by his macho manner, Serena succumbs quickly to Lucky's prowess in the bedroom. But great sex does not a relationship make; Lucky's troubled and bitter past keep him from offering Serena anything more than his magnificent body. Meanwhile, Serena becomes more deeply embroiled in her own sea of troubles, which include dealing with her willful grandfather, an unscrupulous representative from the oil company, and the seething resentment of her sister. The plot culminates in an attempt on Serena's life—engineered by her brother-in-law—from which Lucky rescues her in the nick. Lots of sex, just the right amount of suspense, and a sassy, crackling prose style—in a romance that should more than satisfy devotees of the genre. Read full book review >