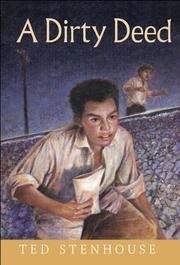 CHILDREN'S
Released: March 1, 2003
A DIRTY DEED
by Ted Stenhouse
CHILDREN'S
Released: March 1, 2003
A DIRTY DEED
by Ted Stenhouse
Stenhouse continues his story begun in Across the Steel River (not reviewed) with another mystery laced with tones of racial bias and starring the same two boys, Will, who's white, and Arthur, a Blackfoot Indian. The title holds double meaning: "deed," as in an action, in this case one against decency, justice, and the Indian people of a small Canadian town on Alberta's prairies. The other meaning, a title to land ownership, here refers to that deeded to an Indian during WWI by the most powerful, cruel, and unjust white man in town, "old man Howe." Now, during the Korean War in 1952, Howe will stop at nothing to retrieve the document that has passed to other generations of the original deed-holder's family. Told in the first person, the adventure-mystery speeds along as the town, its inhabitants, its setting, and history are revealed. Howe controls the Mounties, the town's business, and a gang of thugs who do his bidding, often cruel and physically destructive to those who oppose him. The too-large cast weaves in and out of Will's narrative and relationships become hazy. Throughout, Will and Arthur meet with near-escapes, but there are so many cliffhangers that it stretches reader credulity. The latter is especially so, given the uncertain duration of the endless action, which may cover only a few days and nights. A good many unexplained incidents also occur and may leave a reader unclear about them as real experiences or as mere figments of Will's dreams. Despite a very active plot that portrays the degradation of Canada's first People, Stenhouse tries to do too much and, as a result, fails. (Fiction. 10-12)Read full book review >