Thulani Davis is a poet, novelist, journalist, playwright, and librettist. Among her work are two novels, 1959 and Maker of Saints; several plays, including Everybody's Ruby, which premiered at the New York Shakespeare Festival, and, the librettos for Ami 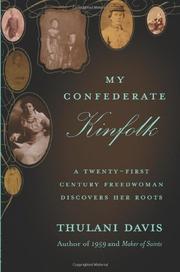 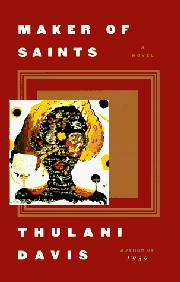 MYSTERY THRILLER
Released: Oct. 16, 1996
MAKER OF SAINTS
by Thulani Davis
MYSTERY THRILLER
Released: Oct. 16, 1996
MAKER OF SAINTS
by Thulani Davis
Second-novelist Davis (1959, 1992) adds a little intrigue to this dull tale of art, love, and death among some black bohemians in New York. Cynthia Kincaid, known to her friends as ``Bird,'' is a sound engineer for Public Radio, having abandoned painting after a scathing review of her first show. Her artistic impulses now seem to be sublimated into her sex life, or, at least, into the art of enticing a wide array of handsome and sexy men into her bed. Her true obsession, though, is the recent death of her best friend, Alex Decatur, an artist ``known for her atavistic clay works.'' Bird is convinced that Alex's fall from her apartment window was no suicide, but somehow related to Alex's violent relation with Frank Burton, a white art critic who also happens to be responsible for the devastating review of Bird's work. Bird and Alex rented adjoining apartments in one of New York's noisier neighborhoods, ``the Quarter,'' blaring with ``the sound of dark bodies in a cramped Babel of passions and spirits.'' When Bird discovers Alex's secret address book, and her library of video diaries, she hopes to find the tell-tale clues to her death. Instead, she realizes that Alex was deliberately trying to torture Burton with outrageous tales of other lovers, which Bird recognizes as based on her own encounters. Burton, meanwhile, fears what might be on the tapes, and eventually sneaks into the apartment only to encounter Bird's elaborate surprise, an art installation that confronts him with the truth. Relying on martial arts and a strange mix of voodoo craziness, Bird gets Burton right where she wants him, and also rediscovers her own talent as an artist along the way. Davis works in lots of asides on black filmmakers, sexual politics among blacks, and religious mumbo-jumbo—all of which diminish interest in the mystery that supposedly drives the plot, but that feels more like an afterthought in this meandering work. Read full book review >

FICTION & LITERATURE
Released: Feb. 1, 1992
1959
by Thulani Davis
FICTION & LITERATURE
Released: Feb. 1, 1992
1959
by Thulani Davis
A black girl comes of age amidst rising interracial unrest—in an accomplished and captivating first novel by a poet, playwright, and native of Virginia. In 1959 Billie Holiday died, rhythm and blues played day and night on the airwaves' ``race stations,'' Martin Luther King, Jr., raised political consciousness in black churches across the South, and Willie Tarrant, this novel's nosy, bright and imaginative heroine, turned 12. Teetering wildly on the brink of adulthood, Willie is more concerned with whether she'll be able to roller- skate in a straight skirt on her first date than in the increasingly aggressive anti-discrimination activities her widowed father, a college professor, and his adult peers are up to. Nevertheless, history and circumstance catch up with her as Willie is singled out as a possible test case in the black community's push for school integration and finds herself forced to conceal her normal 12-year-old personality beneath proper Sunday clothes and Mary Janes. Aware for the first time of the existence of a hostile white community just next door, Willie is caught between her embittered grandmother's tales of the terrible past and her own hopes for a happy future, and she alternately wonders about and celebrates her widowed father's sudden zeal for confrontation with local racists. Before the year is over, Turner, Virginia, experiences its first instance of civil-rights-inspired violence and Willie learns that growing up black in America means something different from simply growing up. Throughout, Willie's intelligence and youthful naivetÇ inform these familiar stations of America's past with humor and humanity. Her voice—frank, amusing and passionate by turns—insists on being heard. A powerful, impressive debut. Read full book review >