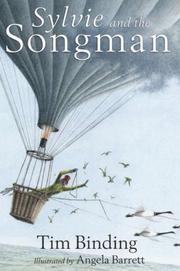 SYLVIE AND THE SONGMAN
by Tim Binding, illustrated by Angela Barrett
This finely tuned adventure opens with William Blake's "The Tyger" and lives up to that reference in surprisingly accessible ways. Sylvie lives with her composer father and "comfortable, obstinate dog" Mr Jackson. They miss mum, who disappeared into the ocean. Practicing for a concert of his invented instruments, dad and Sylvie strike converging musical notes that seem literally to explode, flinging Sylvie into the garden. The next day, dad disappears. The quietly sublime prose calls no attention to itself as Sylvie and stolid friend George, aided by a fox, bravely set out to reclaim dad from the Songman. The Songman steals voices from animals—zoo animals, wild animals, pets—but Binding gives them delicate voice inside Sylvie's mind. Mr Jackson's thoughts, especially, shoot straight to the heart. Barrett's mostly spare, elegant drawings haunt the pages: Animals scatter off edges; an owl flies from the gutter. An unfortunate early reference—to the villainous Woodpecker Man's "black" fingers and hands before readers know he's not human—aside, this is an exceptionally honed story with levels of depth. (Fantasy. 9-12)Read full book review > 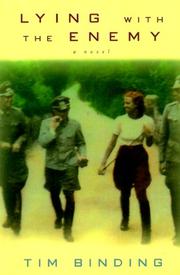 FICTION & LITERATURE
Released: Nov. 1, 1999
LYING WITH THE ENEMY
by Tim Binding
FICTION & LITERATURE
Released: Nov. 1, 1999
LYING WITH THE ENEMY
by Tim Binding
A different sort of storyteller, English novelist Binding shifts from the macabre world of hangings in A Perfect Execution (1996) to the furtive hazards of collaboration among Britain's Guernsey Islanders under Nazi occupation. For them, the horrors of war are muted, allowing an intensely personal tale of romance, duty, and murder to emerge. Life on Guernsey is certainly different after the Germans arrive, but for all the added gun emplacements, gangs of gaunt foreign laborers, short food rations, and jackbooted troops, it's still possible for two men to be in love with the same woman. Ned Luscombe loved Isobel first, before the war, and she reciprocated even though the chasm of class yawned wide between them. By the time the highly cultured, sensitive Major Lentsch arrives to command the occupation force, however, the ardor between Ned and Isobel has cooled, and as the new head of the island police force Ned can only look on as she takes up with his boss. But then Isobel is murdered, and the two rivals are required to join forces in a painful investigation. Along the way, they become unlikely yet fast friends, though ongoing events keep them from making much headway: Isobel's father, the architect of the island's metamorphosis into a fortress, disappears; a thriving black market involving soldiers and civilians comes to light; Ned's lover before Isobel, Veronica, having already become the daylight mistress of the island's Gestapo chief, secretly harbors one of the starving laborers—a boy with the only direct knowledge about who killed Isobel. Churning just below all this, in the witches' brew that Guernsey has become, is the resentment of loyal British citizens who—ve been too long repressed, and a plot that will mean death for every islander should it be carried out. Credible and extraordinarily revealing: all that we are as humans, good and bad, finds embodiment on this tiny island in the midst of war. Read full book review > 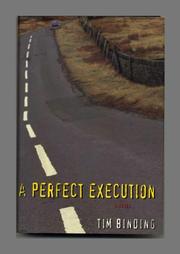 FICTION & LITERATURE
Released: July 2, 1996
A PERFECT EXECUTION
by Tim Binding
FICTION & LITERATURE
Released: July 2, 1996
A PERFECT EXECUTION
by Tim Binding
British novelist Binding (In The Kingdom Of Air, 1994) continues to plumb the dark recesses of jolly old England, but the narrative links are stretched to the limit in this tale of a hangman's knotted existence within interlocking love triangles. Feared executioner Solomon Straw has retired as the story begins, leaving his ropes and his ``stage'' name behind to find peace as a country pub owner with his wife Judith and their infant son. The long tangle of events preceding his return to normalcy and his given name, Jeremiah (Jem) Bembo, however, ranges far from tranquility. Raised with his cousin Will in a family of farmers descended from a famous actor, Jem is ever reserved, while Will yearns for the glitter and patter of the music hall; when the two vie for the affections of young Judith, her choice of the more solid Jem proves a bone of contention for decades. The war changes everything, as a German air raid brings a plane down on the Bembo greenhouses, destroying them and burying a piece of flying glass in newlywed Jem's eye. He watches with crippled vision as his neighbors slowly murder the badly wounded German pilot. Shocked by such brutality, Jem vows to become the most decent and efficient of executioners, even at the cost of his feelings for Judith. But years later, when Dancing Danny steps onto the scaffold for killing a rival in the hopeless pursuit of a local girl, Jem errs in his meticulous procedure, shaken in part by having delivered his firstborn himself only two days before. Then he learns to his horror not only that he has executed an innocent man, but also that the echoes of his earlier rivalry have taken deadly shape in this more recent affair. In its tricky details in the binding up of several hugely different lives, this is a macabre, compelling story, proving powerful in spite of its convolutions and excess. Read full book review > 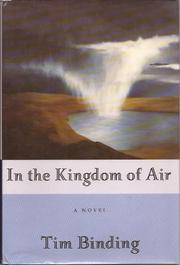 FICTION & LITERATURE
Released: Jan. 24, 1994
IN THE KINGDOM OF AIR
by Tim Binding
FICTION & LITERATURE
Released: Jan. 24, 1994
IN THE KINGDOM OF AIR
by Tim Binding
Part riddle, part romance, part savage indictment of the twisted morals behind Britain's middle-class conformity: a formidable, highly inventive first effort from former British editor and publisher Binding. BBC weatherman Giles Doughty, a gleefully guilt-ridden man of affairs whose weeks are measured by encounters with each of his three mistresses, experiences a midlife crisis of monumental proportion when his sister Carol calls to report the reappearance- -after decades of mystery—of Stella Muchmore. Stella, who vanished when she and Giles were teenagers, had been his partner in nightly adventure as they wandered the streets of their suburban neighborhood, wearing not a stitch and reveling in their rebelliousness; the reminder of his lost youth triggers in Giles a series of tragic recollections, exacerbated by Carol's having been struck down during a great tempest and rendered comatose, unable to provide him with further clues to Stella's whereabouts. Rebuffed by his lovers and plagued by the wily ghost of his adolescent self, Giles searches for Stella with the aid of a trumpet-wielding, semiretired barkeep, probing past and present until the horrible truth about her disappearance—and his own repressed complicity in the deed—comes fully to light. A complex tale, searching in its view of the British family yet at times almost saccharine in its nostalgic flourishes: lavish and engagingly sexy and surprising—a first-rate debut. Read full book review >